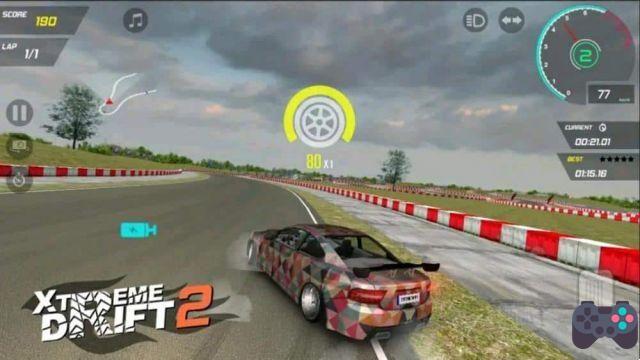 Xtreme Drift 2 is the second in the series of drifting games for Android and web In this title free to download and play, graphics and gameplay have been improved and you can compete on a new variety of stunning tracks. the game is offline and also has an online mode that you can play against up to 3 players.

Before starting the race, you can customize your vehicle by choosing its color and accessories. Xtreme Drift 2 features 28 cars and various customizations including fairings, suspension, exhausts and powerups. Powerups increase your car's top speed, brake response time, and nitro power.

The game has 4 game modes: drift, race, free and online. In drift mode you have 10 free tracks to make the most amount of drift points in the shortest time possible.

In race mode you compete in a one-lap race against 3 bot opponents. In free mode, an open map is at your disposal to travel in search of mini games to earn extra stars.

And finally, the online mode in which you can create a custom room or enter an existing one and compete in races, on the same ten tracks as in drift and race mode, against up to 3 real players. This mode is a mix of drift and race. In it, you win if you reach the best position and earn extra points for skidding during the race.

Xtreme Drift 2 offers customizable controls. You can choose between driving your car with arrow keys, steering wheels or tilting your phone sideways using the gyroscope of mobile devices. In addition to the usual brake/reverse and accelerator, you have access to a virtual handbrake button that helps when skidding on the tracks.

With many customization options, Xtreme Drift 2 is a good game for those who like to customize and “poison” various car models to race against other players. The free mode map, which can be played at night or day, is well-paced with pedestrians and vehicles roaming the streets. But it could be better enjoyed with racing and drift challenges instead of casual mine challenges. The game is very generous to players. He gives away coins by watching advertising videos, subscribing to the official YouTube channel, liking the Facebook page and other in-game things.

add a comment of Xtreme Drift 2 – OFFLINE Game for Android