Windows Phone in decline and Android increasingly at the top 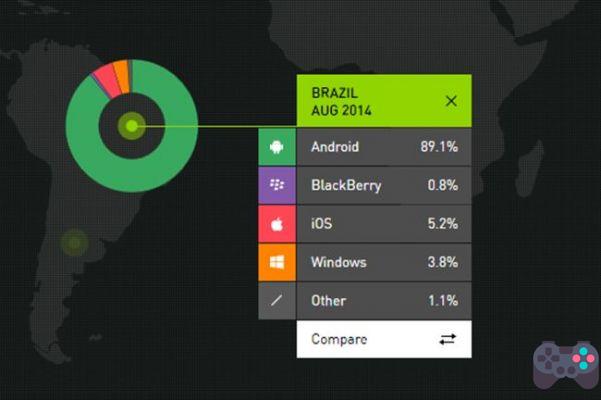 The situation of the system is getting more and more difficult Windows Phone In the whole world. After a slight acceleration in sales in 2013, the adoption of the system dropped all over the world, including Spain, according to a survey carried out by Kantar Research, in August of this year. Here, the drop was so sharp that iOS passed, and now has the second position. Meanwhile, the Android remains isolated with (ridiculous) 89,1%.

Android's dominance in Spain is so great that, just to give you an idea, it is almost the same as that of Windows on desktops, where the Microsoft system is present in 91% of personal computers. In the Spanish scenario, there are only 5.2% for iOS and 3.8% for Windows Phone.

Even with great cost-benefit phones, like the Lumia 630, and the company's next launch in Spain, the Lumia 730, Microsoft continues to lose out here. Why? Part of the reason can be attributed to the sale of used handsets in Spain. Many iPhone owners have sold their devices and exchanged for newer models. On auction sites and sales groups on social networks, the iPhone 4 is widely marketed, an outdated device, but still very much desired. You can find the device for sale even at street vendors (only God knows where it comes from).

Just to be clear, the iPhone 4 will no longer receive system updates and will stay on iOS 7.1. Only iPhone 4S and later received an update to the new version of the system, iOS 8, which is already at version 8.1.

Many people say that the Windows Phone environment still needs to “mature” and I think this statement is completely wrong. Windows Phone is already a very lean system, which has qualities that rival Android and iOS. Version 8 brought a new core that, in addition to making the OS faster, brought a much easier environment for developers. So what's missing then?

It's been four years since Windows Phone 7 was released and with the update to 8.1, it is already more than mature, the problem lies in the presentation of the product and not in the quality of the operating system.

The "presentation" of Windows Phone is so weak that only in version 8.1 of the system, Microsoft released an application for you to "see" things as if you were on the PC, something like a "Windows Explorer".

O Files (Archives in the Spanish WP Store) can be found and downloaded for free only by Windows Phone 8.1 owners. With it, you can easily access photos, videos, downloads without having to go looking for a specific app. This is something that should come from the first version of the system!

“Its functionality should be Windows Phone OS standard, it makes no sense to have to download an app that organizes files since it should be default”

For me, the biggest problem unfortunately is in the system interface. Don't get me wrong dear WP user, the interface is excellent, beautiful and very cool. However, it is only after a short introduction that the lay user is convinced that it is really good. You need to show where things are, what those blocks are and show how to do some basic functions. Removing the icons was a huge blow to the average user.


Oh don't you think? So what can you tell me about Windows 8's low reception on desktops, and the fact that Microsoft went back and re-added the old "Start" button in Windows 10. That's not for nothing, young man. Users wanted the “old start” and not a completely revamped interface. The same happens with Windows Phone, the lay user sees a device with Windows Phone and thinks: “I don't know how to handle it”, “how do you call it?” “I'm going to buy a Galaxy or Moto G which is easier”.

Another big Windows Phone problem is on the outside. With a cheerful and youthful look, none of today's devices have that premium finish that many people who buy a top device expect. Even the Lumia 1520 leaves something to be desired in this regard, with sharp edges and very colorful versions.

Being the last in the smartphone race (let's face it, Blackberry doesn't count) Windows Phone loses ground due to Microsoft's inability to see the obvious, to make the system more comfortable for the user. In addition, the lack of a “premium” appearance device is also harmful, as there is no “that” smartphone with Windows Phone that is the desire of any consumer. It's about time Microsoft created a “Lumia X” or something similar, instead of releasing more ultra-colored devices with numbers in the nomenclature that lay users will even be able to remember.

wipEout Rush: comes to Android and iOS in a very unusual way ❯