We tested the RPG Undecember, “competitor” of Diablo Immortal (Android and iOS)

A line games in partnership with developer Need Games launched in beta test (early access) in South Korea the game Undecember. The game has been drawing attention for having an aesthetic and gameplay very similar to the Diablo Immortal.

The RPG made in Unreal Engine 4 has very beautiful and fluid graphics as highlights. We tested the game on POCO F3. 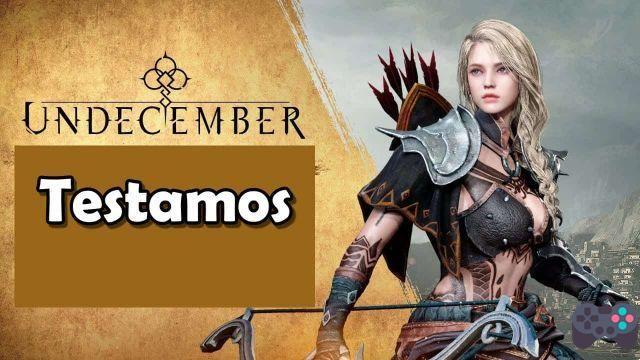 Early access will be short, only from the 13th to the 19th of October, and will give users the chance to get to know the game. We tested the title first hand.

It's impossible not to play Undecember and not remember Diablo Immortal. Line Games' game looks a lot like Blizzard's. But appearances are more about the look than the gameplay itself.

Right away, Line's great merit was abandoning (at least as far as I've played) the automatic mode. Undecember has auto-quest, but so far it hasn't enabled the "auto battle" (automatic battles). It is worth remembering that this preview is about the beta test, everything can change in the final release of the game.

Undecember's look is gorgeous. Also noteworthy is the fact that the game runs well on various types of devices. There are several graphic options to adjust and make the game the way you want.

From the HUD position to the battle style, everything is very reminiscent of Diablo Immortal. But luckily, Need Games took care that Undecember didn't look "too similar". The look of the characters is completely different from what we are used to seeing in Diablo franchise games.

The player can create his character and choose what his starting class will be. In the beginning there are only 3 classes: mage, archer and swordsman. As you advance, the player can unlock new classes and they are defined only by the weapons and skills you conquer.

Not so interesting battle system

Undecember lacks a bit in the battle system. Yes, I know the game is lagging, of course it is supposed to be, after all, the server is there in South Korea. But I found the combat system a little boring.

Right from the start, the game gives you a taste of what it's like to be at level 50 with lots of items and various abilities. And the feel of combat is weightless. You're basically going to have to smash the skills button.


So we may fall into that old “focus is on leveling” scheme. This is something that has to be handled very carefully so the game doesn't sound too “greedy”. It would be a shame, as Undecember looks pretty good.

But the best is to wait and see. Undecember will also feature cross-play across all platforms and will feature co-op and PvE and PvP events.

At least, as far as I've played, the game no auto-battles, and that's a big relief.

No release date in the west

Calm down, hold the hype. Undecember has no casting accuracy in the west. The title does not yet have a release date even in South Korea. According to Line Games, they will collect player feedback and see if the game's reception has been good. If all goes as planned, Undecember could be released in 2021 in Korea. But in the west, it can wait until 2022.

Undecember is set to be released for Android, iOS and PC.

add a comment of We tested the RPG Undecember, “competitor” of Diablo Immortal (Android and iOS)