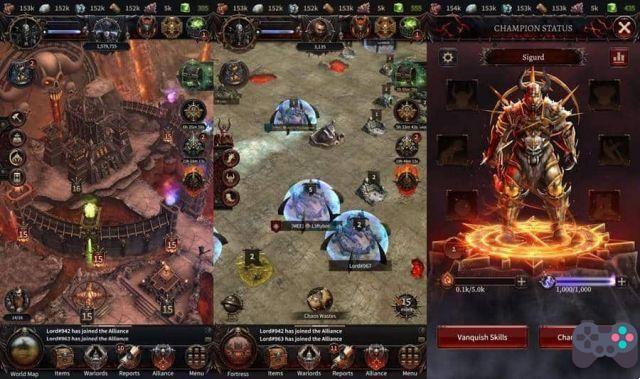 A Tilting Point, in partnership with Games Workshop e Hunted Cow, opened pre-registration for the epic fantasy strategy mobile game, Warhammer: Chaos & Conquest. Along with a gameplay trailer, the in-game universe that is based on the Warhammer franchise was revealed.

Players can build an imposing fortress, lead a mighty war band, and dominate their enemies within the Warhammer universe. Anyone who wants to know the game can pre-register now on their Android and iOS devices. Players who register will receive rewards when the game launches globally.

Warhammer: Chaos & Conquest features iconic lands, characters and legends from the Warhammer universe. The game allows up to 50 players to defend and support each other in PvE combat – or engage in intense PvP battles to fight for precious resources. Classic Warhammer races such as Beastmen, Daemons, Dwarfs and more challenge players to conquer the ancient world.

Each group will help players defend their empire, building their army by summoning demonic troops and conquering the Empire with Chaos Champions.

Pre-registration will give players exclusive bonuses worth over $10 USD, including a Warlord Pack and Warpstones.

O Warhammer: Chaos & Conquest is currently in open beta in the Philippines and Indonesia, and will be available to all players soon.

Link to Pre-Registration on ANDROID

Author of the Article: Lucas, Owner of the Nerd Descolado Page

Warhammer: Odyssey is an old-fashioned MMORPG for Android and iOS ❯

add a comment of Warhammer: Chaos & Conquest opens pre-registration on Android and iOS