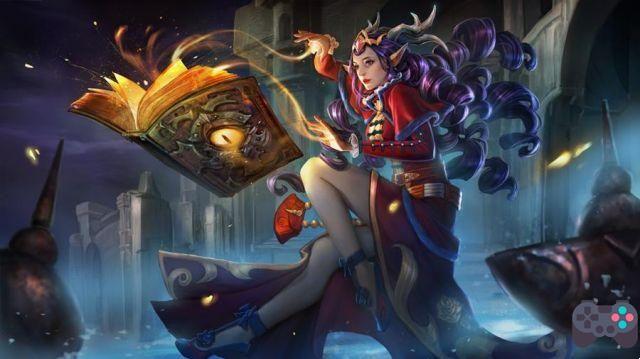 The summer season introduces a new progression system for Vainglory (Android e iOS). Focused on fun for all players, including something new to collect (Sunlight) and a daily Summer Chest filled with rewards. In addition to season-exclusive skins, card events, a summer map for Halcyon Fold, new quests, new in-game items (yes!!) and a new support hero ready to make a big impact. This amazing summer party will start in Update 1.19. Don't miss out on the fun!

The first skin to join the fun will be Krul Summer Party, it will arrive in the game on June 24th. You will be able to unlock this season skin with ICE or by collecting special Summer Krul cards from the spoils of war, chests, special ICE crate and summer events. Summer Party Mystery Skins will be revealed and released in future updates. Learn more about the summer's special card events and all the details on seasonal skins below.

No matter how you play, the summer will dole out better and better prizes as you progress. In Update 1.19, you will find a new tab called SEASON within your player profile. There, you'll find new Summer Chests filled with amazing surprises that you can open every day. In addition, this chest will also level up, just like you, containing better and better prizes. This is just the beginning. You will be able to gather Solar Light to improve your rewards and get Extra Sunlight when using skins in matches. Be sure to read the entire content!

Starting with the summer season, you'll have a lot more freedom and variety in building builds. The reason for this is the addition of new items and the overhaul of builds; supports no longer need to purchase the Ironguard Contract as their first item. The Ironguard mechanic is now “always on”, without having to buy anything from the Shop. In addition, we changed the range of gold and experience and the gold obtained per second. We really recommend that you read the summer changes as they will affect all your matches!

Lyra uses her healing and protection magic to turn enemies' positions into zones of power for her allies. Utilities and defense items enhance Lyra's role as a healer, while crystal items make her a formidable but fragile mage.

Lyra can only be unlocked by ICE for the first 7 days. After that you can unlock Lyra with ICE or Glory.

Lyra's attacks are arcane missiles, they deal crystal damage. If she remains in position after launching an attack, she automatically channels and launches an even more powerful arcane missile, this missile will deal additional crystal damage and apply a brief slow to the target. Each channeled missile consumes energy, but Lyra can continue to launch them even if she runs out of energy.

Lyra creates a seal at the target location and reveals nearby enemies. As long as the seal remains active, it will heal nearby allied heroes and damage nearby enemy heroes. Lyra can reactivate this ability at any time to detonate the seal, dealing powerful damage to nearby enemies while granting a burst of healing and a moderate movement speed boost to nearby allies.

After a brief delay, Lyra launches a pulse of magical energy, dealing damage and applying a gradually decreasing delay to surrounding enemies. The affected area becomes a fenced-in protection zone that deals the same damage and slows enemies that try to cross the boundary. Enemies within the zone are trapped, they can move normally, but cannot activate movement abilities.

Lyra teleports to the target area, leaving portals at the beginning and end of the teleport. Portals last for a few seconds, allowing allies and enemies to move freely through them in both directions. Heroes must wait several seconds before re-entering the portal. This cooldown also applies to enemies when Lyra hits them with the initial pulse of Bright Bulwark's ability.

Learn all about Lyra's abilities, as well as the best team compositions to go with her and how to beat her if you find her in the Fold.

Find new skins at the Vainglory Market every Friday.

Some of our heroes will receive special attention this summer. Keep an eye on Vainglory's Market for new hero arts.

The summer season brings new quest types and an incredible number of additional quests to Vainglory. In addition, we will start accepting suggestions for new quests and pick some that will be turned into real quests in the next update!

Every now and then, a local internet issue can result in a frustrating gaming experience. This new ping indicator will allow you to get a better idea of ​​the quality of the incoming connection from your router and ISP. Note: although this indicator provides general information about the connection, it is not able to predict local ping spikes.

STANDARDIZATION OF THE PRICE OF HEROES

The following heroes received increased ICE and Glory value in Update 1.19: Koshka, Petal, Catherine, and Glaive. With this change, these heroes will be able to be included in future promotions, events and special packs, something that couldn't be done before.

The other big reason for more flexibility in builds is the greater variety of items!

With the introduction of Environmental Gold, the Ironguard Contract is no longer an essential item for any and all support builds. Instead, some other options have been introduced in-game in the OTHER section of the Store. They can grant you considerable power early on in the game, or if you feel the need for a power boost at any time during the game, and for a fair price, you can buy these fantastic Contracts. However, keep in mind that none of these bounties can be upgraded into another item, but they can be sold for half price.

Ironguard is now specifically geared towards allowing a slightly more confrontational exit from the jungle and keeping the jungle duo more health in case of invasions. Despite no longer being a necessity, Ironguard is still an excellent first-time purchase.

A slightly more defensive start, the Protector Contract lets you protect your teammates as long as you're close enough to do so. This is a great buy if you're expecting heavy attacks from the enemy team or planning to fight early in the game.

The Dragonblood Contract allows you to be more aggressive at the beginning of the game and allows you to dominate the game from the beginning, however, this initial advantage decays very quickly. Having a reasonably long cooldown and fixed damage is a great tool for calculated ambushes and strong early game offense, but it's also a great item to sell around mid-game.

Stormguard Banner received some modifications. We want it to be a strong choice for heroes who have weak abilities to take out waves of minions or clear the jungle, and for teams that intend to control objectives rather than constantly confronting enemies. However, this item comes with the inconvenience of having to sacrifice a considerable amount of combat power.

An improved version of the new Stormguard Banner. Deals considerable but not excessive damage to heroes. It's fantastic for destroying objectives quickly.

WAR TREADS (WARHORN IS NOW A TYPE OF BOOT)

These new boots have replaced the Warhorn as a mobility item option for the team. If you're ever in a situation where you need to get in quickly with your team or get out of a fight really fast, War Treads is the perfect buy.

A powerful new option to hunt down your enemies or evade a chase. Halcyon Charges will help you run towards danger or escape it. Choose this over Journey Boots when prioritizing skill usage over reload speed.

Offers an early game view option. Choose the Flare Gun if you're planning on tracking your enemies constantly.

“Skaarf was doing a lot of hidden damage with Fan the Flames, so we made adjustments to make the source of the damage clearer.” —Zeken

“Adagio was a little too powerful when joining forces with allies with high attack speed.” —Zeken

“Without being able to use two Infusions, we can allow for crystal fees that would have been just an added bonus in previous updates with one Crystal Infusion.” —Zeken

“With Lyra bringing in fun new technology, we will now be able to use the range of abilities to stop the movement of enemies. This change will help Gauntlet better fulfill its objectives in battles.” —SurpriseBirthday

“Fixed an annoying bug that will help players build builds to take on Blackfeather, we’ve also reduced its late-game power in exchange for more consistency early on.” —Zeken

“Catherine is the perfect choice in many situations, but we wanted her to continue to pursue relentlessly rather than running out of energy.” —Zeken

“In Patch 1.19, we changed the animations of the SAW so that it moves more smoothly when using Spin Up. Basically, he continues to face his target when using stutter stepping, instead of turning backwards and forwards very fast, it just got a lot better. Although it confuses people a bit at first, it's just a visual change, nothing has changed in SAW. Players will just have to mentally get used to the new animation.” —AWAL

The summer season is full of new content. Don't waste time and explore the new progression system, new hero, exclusive Summer Party skins and much more. And the most important, remember to open your special Summer Chest every day in the SEASON tab on your profile. The loot is waiting for you!

Is it worth buying the Xiaomi Mi5 or Mi5S Plus? ❯

add a comment of Vainglory: See All Update 1.19 Details and Upcoming MOBA News