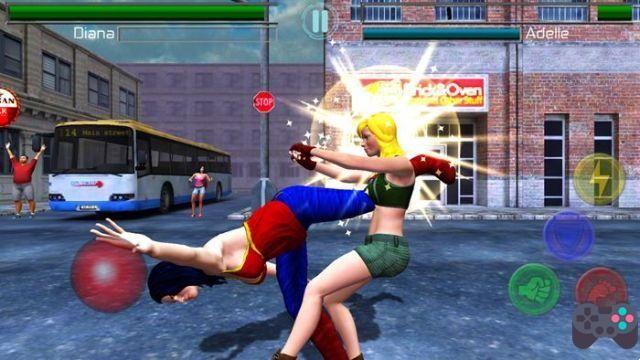 Underground Fighters is a fighting game to Android, iOS e Windows Phone developed by the Spanish studio Play Systems. The game has 8 characters, each with unique moves and moves.

The game looks like a mix of Tekken with One (Yes, the one from N-Gage). The gameplay consists of controlling the distance, you have to be aware of enemy movements to be able to fit blows, combos and even special attacks.

The commands are simple. To move the character, there is a virtual analog on the left side of the screen. On the right side are action buttons consisting of attacks with kicks, punches and a button to release a special move. This special move relies on an energy bar at the top of the screen.

Underground Fighters is an independent project and, to a certain extent, somewhat amateurish. Because of this, when evaluating the game, take it easy. The game has potential, it just needs to be a little faster. The movement of the characters is slow, and the amount of life of each one is very large. Even when turning off visual effects, the game remains a little slow, even on high-end smartphones.

The emphasis is on variety. Underground Fighters has wrestlers, capoeiristas, sumo and street wrestlers. The premise sounds pretty good, but the lack of content like a story might put some players off.

Underground Fighters is an offline fighting game. It is available for all three major mobile platforms. The idea is very good, and the game focuses on simplicity. However, the lack of other modes and especially a story mode, makes the game very repetitive in a short time.