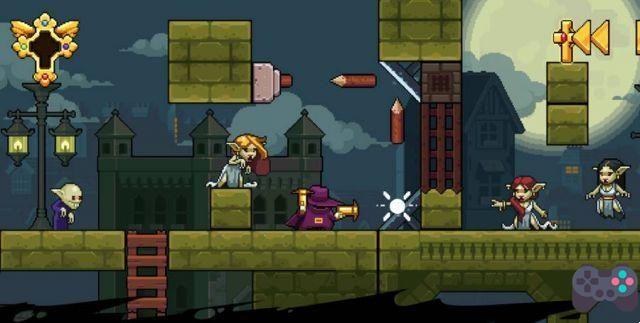 Turn Undead 2, follows the formula of the original game. A fun puzzle with platform elements with 2D graphics and differentiated gameplay. The adventure takes place in turns. A great offline game to play on Android and iOS.

The hunt for our vampire killer reaches Egypt. Now he saw it against mummies, zombies, and of course, vampires. The gameplay remains the big difference.

The game only gains movement when the player touches the screen and swipes his finger in any direction. Just take your finger and everything stops moving. You need to finish off enemies with stakes, which are fired by tapping the screen. However, they just touch your character for him to die.

Just looking at the images, it looks like a platform game, but it's not. Turn Undead 2 is a puzzle that requires a lot of thinking. Your character will always be in small settings, surrounded by enemies. You have to find the right combination of movement to defeat the monsters or get out unscathed.

One of the highlights of the game are the bosses. It took a lot of creativity to create bosses in this style of gameplay that actually work.

Like the first Turn Undead, the second game is exceptional. Very well imagined and with puzzles that combine perfectly with pocket play. When playing around, you'll find that the game doesn't demand your attention 100% of the time (like action games) and that allows you to play literally anywhere.

Tip: Play offline, this game displays a lot of ads.

Tutorial – How to buy games for Android in Amazon Store ❯