The fourth game in the Total War series is strongly recommended not only for veterans but also for newcomers to this real-time strategy franchise. The game has 3D graphics, which allows you to view the battles from different angles.

Originally released for PC in 2006, the game created by Creative Assembly and published by SEGA, features strategy battles involving hundreds of soldiers.

Considered one of the best Total War ever created, Medieval II has 17 factions to choose from where each has its own army.

One of the highlights of the game is the wide variety of elements that can impact the time of battle. Combat will not always be on open ground. The game features battles in dense forests, under heavy rain, on hilly and sloping terrain. All of this impacts the performance of soldiers. 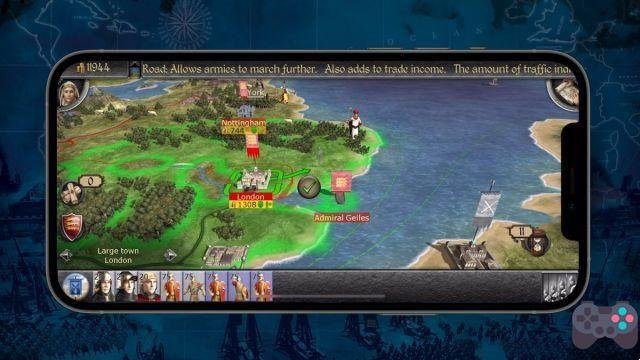 What is it like to play Total War: Medieval II on smartphone?

With a completely reworked interface, Total War: Medieval II looks great on tablets, but you can play it on mobile too.

Menus, interface, buttons, everything has been reworked to make it more comfortable to play on the smartphone.

Coordinating troops during combat is much simpler than you might think. There are shortcuts for selecting and deselecting troops, changing viewing angles, and

You start the game with 6 factions to choose from: England, France, Moors, The Holy Roman Empire, Spain and Venice.

In the game, you have to create and manage your own army, as well as your own kingdom.

Total War: Medieval II is presented through a world map, where you see your kingdom and enemies (or allies).

But it's the battle mode where the game shines. All in 3D, wars are well-represented events that show how essential strategy on the battlefield is.

If you are a veteran of the Total War franchise and have played the game a lot on PC, you can use keyboard and mouse on your tablet or smartphone.

Total War: Medieval I has full mouse and keyboard support. The game is perfect with these two peripherals.