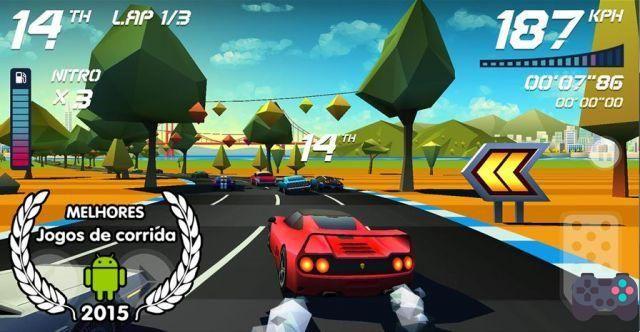 racing games are one of the favorite genres of those who like to play on mobile Android. In this top, we present the games launched in 2015, which stood out throughout the year. It is worth remembering that the list is composed only of games from 2015, that is, there is no point in crying over the absence of Asphalt 8 ou Real Racing 3.

Drift Spirits is a racing game with drifts and a casual proposal. Instead of complex controls, the game offers the simple command of touching the screen. The fun is on account of the half anime vibe of the game, with a story that involves the characters of Initial D.

The graphics is another highlight, instead of the camera fixed in the back, it is positioned in several different places, giving the impression that we are watching a televised event. The end result is very positive and a game almost impossible to put down.

Death Moto 3 leaves a point of the proposal of the “little games” of the series and brings to Android, a very nostalgic gameplay, which one? Road Rash! The game is very reminiscent of the 3DO classic, despite containing many new elements such as those of Asphalt 8.

The main highlight in Death Moto 3 is the possibility of using weapons to take down opponents. A fun motorcycle racing game like little seen on Android.

Rush n Krush is definitely the craziest and most clueless game on the list. In a world where racing and exploding the cars that appear in front makes perfect sense, we embark on a fun game by Netmarble, which has infinite modes and a campaign, with a story in Spanish.

The look is nice, but only if your cell phone is top. This caveat is due to the speed of the game and the amount of explosions and destruction on the screen. With just a powerful smartphone, you can enjoy all the fun Rush n Krush has to offer.

From a little-known producer, we have Dubai Racing, a drifting game where you face opponents on open tracks and must fulfill objectives to score points and win races. The game has several modes for competition between players, including car theft.

The year 2015 was marked by the release of the film Fast and furious 7. The Android game has all the vibe of the movie, and despite having a simplified gameplay, it delivers a jaw-dropping look.

The graphics are spectacular, but the controls have been greatly downgraded. This makes Fast & Furious: Legacy an impressive game to watch, but still too casual for those looking for a bigger challenge.

5 – Need for Speed No Limits

The release of Need for Speed ​​No Limits was practically a sick joke. The subtitle “No Limits” made no sense with a game full of limitations, internet access requirements and microtransactions.


Controversies aside, the EA and Firemonkey game has its qualities, such as visuals and simple controls. However, the defects weigh too much and place a game that could be excellent, only in the fifth position.

Now, the top 4 starts with one of the biggest surprises of the year. Cyberline Racing is a racing game with cars equipped with weapons, bombs, missiles and much more. The game earned the deserved fourth position by offering full races (albeit short) and varied stages with even bosses. There is even a backstory.


Cyberline Racing also has an asynchronous online multiplayer mode (just like Real Racing 3). All packaged in a freemium package, which takes a long time to “get into gear”, but worth the download for the huge amount of varied races.

SBK 15 is the official racing game of the Super Bikes championship. Just like the 2014 version, we once again have a game with the full motorcycle season, multiple races in a single event and great visuals. The game is a bit hardcore for those looking for just casual fun. Perhaps because of this, it is not very popular on the Play Store, but the quality of this title is well above the average of other games in the genre.

Asphalt Nitro is the miniature version of Asphalt 8, period. By bringing, in a tiny download package, much of the experience of one of its most successful games, Gameloft nailed it in a game that has the face of mobile gameplay: offline, little space and very beautiful graphics. Despite being small, the game has a long campaign and a good collection of cars.

No use, in the year 2015, in terms of speed, Horizon Chase is king. And if you are from the generation that grew up playing Top Gear, not playing this game is the same as denying your entire childhood!

Horizon Chase is the fusion of the composer's mastery of the original Top Gear songs with one of the best Spanish studios today. The end result? An addictive title that is pure nostalgia. By offering a premium package with no in-app purchases and no internet required, Horizon Chase is the racing game where all other games should mirror themselves. Focus on fun and not on the player's pocket.