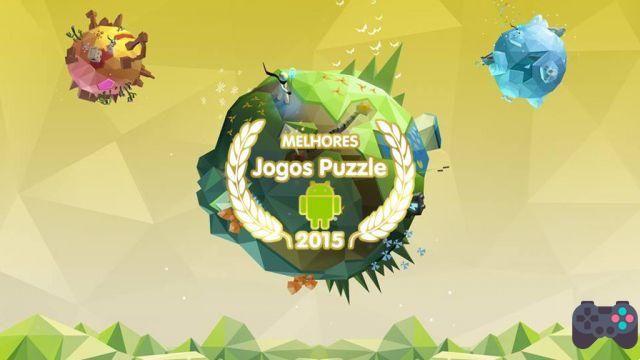 The year 2015 was full of colorful pieces to match, boards, and mechanics that required more than just fast-paced, unrestrained action. Discover now, the mobile games that stood out the most when it comes to breaking your head.

Perhaps as important as expressing your art is understanding it. And apparently, the bear from “Bears vs. Art” got it all wrong. In command of this bear, the player must terrorize various art exhibitions. The gameplay consists of using fast movements, dodging obstacles and to detonate the paintings.

Produced by the same producer as Horn, Heroes Reborn: Enigma exhibited in 2015, a great visual but a bit boring gameplay. The game follows a proposal similar to Portal (Valve), but has very simple puzzles, which only earned it the ninth position in our top. In the game, we control one of the characters from the new TV series Heroes, and we need to escape from a macabre laboratory.

Google Play is literally full of games with candy, rocks, balloons, and all sorts of colorful things for us to match. In the midst of this epiphany that seems to have come out of the use of some hallucinogen, choosing the best match puzzle was a hell of a task. But Rovio's Jolly Jam is an easy choice. Not for its ease, but for the traditional mechanics, added to boss fights. A simple proposal game that doesn't try to reinvent the genre, but it's definitely one of the best puzzles of 2015.

After watching Inside Out, a bobble puzzle game was almost obvious. But in addition to being well contextualized with the theme of the film, the Android game Inside Out has a good challenge and funny characters, each with themed scenarios and hilarious phrases. A casual and relaxed puzzle game to play and have fun on the go.

6 – Beneath The Lighthouse (Grátis)

You spin and the world spins around you. In addition to a good catchphrase, the expression also serves to describe Beneath The Lighthouse. In this Nitrome puzzle, the player must help a boy find his grandfather. But first, you have to literally go around the world to find the exit. A different game that certainly deserves to be in our top 10.

It doesn't take much for a Cut the Rope to make it into any puzzle list. All it takes is a few small gameplay additions and a touch of innovation. And that's exactly what ZeptoLab did with Cut the Rope: Magic. With the ability to transform into various beings, Om Nom can now fly and even swim. But that doesn't mean the game has gotten any easier. Cut the Rope: Magic is one of the most elaborate puzzles on the Play Store.

Angry Birds 2 is the official sequel to the first game, originally released in 2009. Since then, Rovio has been refining its formula through the spin-off Seasons and Space. But Angry Birds 2 is not just a sequel with more levels. The game radically changed the way players see the stages and mainly interact within the scenarios. In Angry Birds 2, it is possible to face several buildings in a single level.

In Magic: The Gathering – Puzzle Quest, the thing is taken seriously. It's not just a puzzle with Magic characters. Each turn, the player draws cards as he makes combinations on the board. With cards “in hand”, you need to combine mana of the same color to unleash powerful blows. The result is an intricate mix of matching card games and one of the most difficult and genius puzzles of 2015.

Lara Croft GO is by far one of the best puzzles of 2015. On Android, the game starts slow and simple, but then a scenario of complete chaos unfolds that will only be organized in the player's mind, if he decides to go ahead. The genius of the puzzles, combined with action commands, hide the idea of ​​“thinking before acting”. The idea of ​​a Go game, but focused on action, worked very well.

Lara Croft Go is great, but it's still a Rip-off of Hitman Go, released by Square Enix in 2014. Path to Luma is something completely new that will massage the gray matter of players with a current theme. The game presents in a subtle way, and without coxism, an environmental challenge, to find energy solutions for small planets. With a touching soundtrack and a calm gaming experience, The Path To Luma is a puzzle game designed to play with headphones.

For being a “not so obvious” title, The Path To Luma takes the trophy for best puzzle game. The game instigates the player's imagination from the first screen and the first rotation movement of a planetoid. There are only 20 levels, but the game is completely free, and there are very few ads. Most interestingly, the title does not denigrate itself for being free and even manages to be better than many paid games.