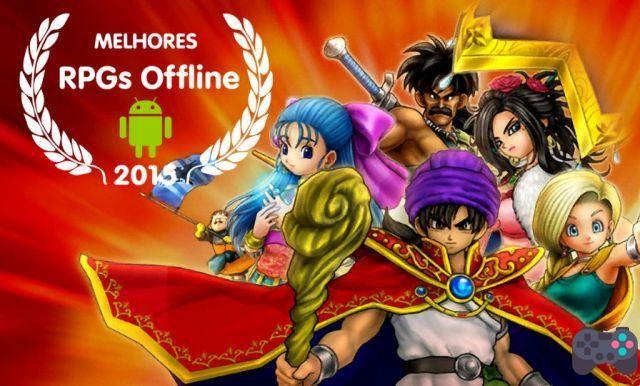 In the year 2015, few offline RPG games were released, even so, it was a year of big surprises with a Pokémon clone and a psychedelic "Final Fantasy". With you, our top 10 best RPG games that don't need internet.

In this mix of strategy and RPG, your mission is to take a character to explore various locations aboard a Templar warrior armor. The great highlight of the game is the combat system and recruitment of allies. A mixture of tactical combat, in turns, with the possibility of moving around the scenario. There are 45 scenarios to explore and collect items to customize your character and armor. A different adventure, with space exploration, bizarre beings and lots of content to explore.

One of the few free games on our list, Asdivine Dios is the sequel to a game from producer KEMCO. Set in paradise, the deities are perplexed by the possibility that they are no longer immortal. To investigate what happened, your character sets out on a mystical adventure. The atmosphere of Japanese RPG with characters in pixel art is the footprint of this game. With combats in the classic Final Fantasy style, Asdivine Dios earned its place by being able to play from start to finish without paying anything.

Shadowrun: Dragonfall was originally intended to be the expansion of Shadowrun: Returns. Android received the first version of the game at the end of 2014 and the director's version (Director Cut or DC) in 2015. In Dragonfall, you have 17 more missions to complete and you can play them even without having bought Returns. The game with isometric view and very beautiful graphics needs about 20 hours to complete.

Steven Universe: Attack on the Prism

Steven Universe: Attack on the Prism is what we could call an introduction to the turn-based RPG style. Developed to be played by children of all ages. The game is only ahead of Dragonfall because of the bugs presented. While the experience can be problematic in Shadowrun: Dragonfall, in Assault on the Prism everything runs perfectly smoothly. The game is all in Spanish and features a fun story where Steven will need to help the Crystal Gems in yet another adventure.

EvoCreo is more than a silly Pokémon clone. The team that developed the game really thought about several aspects and delivers a title with an experience very close to the classics Pokémon Red, Yellow and similar. 2D visuals, three little monsters to choose from at the beginning, lots of cities to visit, gyms to fight and NPCs to talk to. There are more than 130 monsters and they have a very good balance.


Aralon 2 is the long-awaited sequel to the game originally released in 2010. Five years have passed and although smartphones have evolved a lot, little has changed in terms of gameplay. If the look wasn't what we expected, at least in the field of exploration and character development Aralon delivers what it promises. Day and night system and an open world to explore.


By far one of the funniest RPGs of all time, Knights of Pen & Paper got its well-deserved sequel in 2015. The Knights of Paper and Pen kept their Spanish translation, but the studio changed. The Spaniards leave Behold Studios and the production company Paradox enters. Based on the first game, Knights of Pen & Paper 2 has less of an acid sense of humor, but retains references to nerd/pop culture and fun missions.

Beast Quest is one of the surprises of 2015. A game that invites anyone to play the genre, while captivating lovers of the genre. Based on a series of books, Beast Quest is much more than a game with beautiful graphics. It takes the player on a journey with different controls but focus on the roleplaying experience. Combat is a mix between Infinite Blade and use of items and spells.

Another big surprise in 2015 was Fearless Fantasy. For those who enjoy the genre, it is common to find traditional stories about the end of the world, legendary knights and heroines in short clothes, the psychedelic tone of this adventure will be surprised. Bizarre creatures and mechanics that involve sliding your finger across the screen are just the appetizer for one of the most different games of 2015.

There was no other way, although Fearless Fantasy brings many new features to the genre, it is in Dragon Quest V that you should bet if you want to have a complete experience of a traditional RPG. The story is cliché, after all it is based on the game originally released in 1992, but here it is concentrated on what you are looking for in an offline game of the genre. Great campaign, charismatic characters with the incredible trait of Akira Toriyama, Dragon Quest V is not only a very good game, it is a remarkable title that will stay in the memory of any gamer.