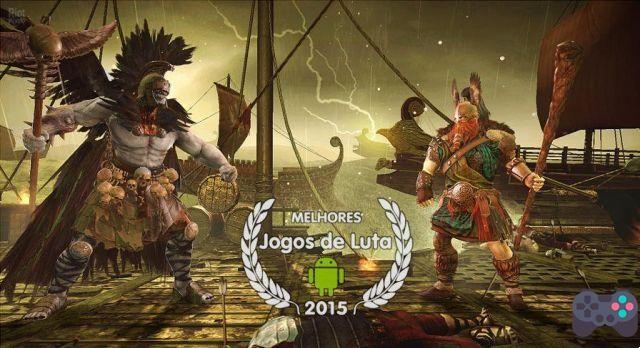 If there's one genre that hasn't done very well on smartphones, it's fighting games. The few fans of this style are divided into two groups: those who do not give up good physical control and those who like games with on-screen controls. Among the players' preferences are games that either focus only on randomness or titles that invest in more elaborate controls. Check out the list of who did the best in the difficult production of fighting games on Android.

The WWE 2K wrestling allegorical style arrived on Android in April. With gesture controls and graphics reminiscent of the Playstation 2, WWE 2K is an interesting title for fans of the sport. However, the commands left a little to be desired. The game reached our top 10, solely and exclusively because of its real-time vs mode. Amazingly, something rare in today's mobile fighting games.

Fatal Fight is obviously inspired by one of the first fighting games of the genre: Kung Fu for Nintendo 8bits. Divided into phases, in this game, we fight against several ninjas, and we need to defeat them all, to access the following scenarios. The speed in the responses of the controls is incredible and the possibility of combos as well. This is where the mobile fighting games of the future begin to be designed, solo adventures with lots of content to unlock.

From the creators of Pizza Vs. Skeletons, in The Executive, we control the good brawling executive who faces the most bizarre creatures ever seen. The game mixes fighting and RPG, but the controls are 100% action-focused. A lot of punching in a game where you attack, defend, do combos and more. The most interesting factors in the game are the stimulus to see which new monsters will appear and how this adventure will end.

Amazing how a power of a movie franchise tends to extend. Inspired by the movie “Giants of Steel”, in Real Steel Champions you can create your own robots and fight against other canned goods. The controls are nice and the setting in the 2011 movie is very good. Beautiful graphics in a robot fighting game.

Real Boxing 2 changed at the last minute, and became the official game of the movie Creed. In this game, the objective is to cross the USA, challenging the best boxing fighters. The game is inspired by the movie and we can play with Adonis Creed, the son of Rocky Balboa's eternal rival (I think the right one would be the grandson..rs). The game surprises with its graphics and new career mode, with minigames with training for your fighter.

“What do you mean Mortal Kombat X only in fifth position?” So it is! MK X Mobile suffers from a lack of incentives for the player to keep playing. Of course, the fact that the game is from one of the most famous franchises is a huge incentive. But disappointment will show on your face with bland controls, back-and-forth gameplay, and a level system with hundreds of turrets full of enemies and zero story. The only positive point is the setting and the graphics that are spectacular.

Certainly one of the most outstanding games of 2015 was UFC. When bringing the most violent Octagon in the world of sports to Android, EA made some mistakes. The first is the obvious absence of a vs. The second is that the game has only one career mode. Here we find the same lack of motivation to continue as in MK X. Fortunately the controls are much more original.

Bladelords is an example of what the control of a 3D mobile fighting game should look like. By mixing Soul Calibur and Street Fighter Alpha, Bladelords is a game that will surprise anyone who thinks that every mobile fighting game needs to have silly controls like MK X and Injustice. The command layout is classic, a directional pad on the left side of the screen and action buttons on the right side. Although it sounds complicated for beginners, the learning curve is light, and in no time, you'll be pulling off amazing punches.

Just compare Mortal Kombat X's controls to those of Garou Mark of the Wolves and you'll see why this arcade classic is in fourth place. Combos, special moves, all done old school style. It's possible to use shortcuts, but most importantly, the game supports physical controls and a gameplay that respects the fighting games we love so much, which Mortal Kombat X Mobile doesn't do!

Gods of Rome arrived at the end of 2015. Gameloft's fighting game may have its gameplay clearly inspired by the competitor Marvel Tournament of Champions, but just like this game from 2014, Gameloft bet on quick commands, the possibility of combos and a cool story , where you control the Gods of Olympus. With impressive compatibility, Gods of Rome runs well even on entry-level devices. The positive point here is the power limitation, the only freemium factor in the game and that recharges very quickly.

Gods of Rome takes the trophy for best fighting game for pleasing those looking for a casual fighting game that will usually only play alone. Thus, the story factor becomes important and, combined with a simple and addictive gameplay, make perfect sense in a game whose proposal is to be played for just a few minutes every day and not become boring.