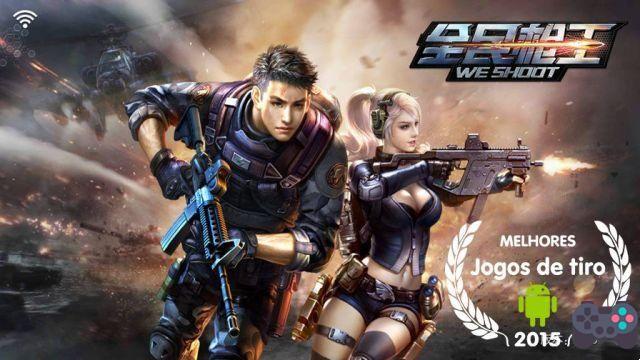 If you like action games on Android, you probably also like shooting games. One of the most dominant genres on smartphones, FPS and TPS are always in evidence, whether for the graphics or for the satisfaction of finishing off opponents with headshots. With so many titles released (and re-released) in 2015, it's time to pick the best of the best shooters of 2015.

Note: This is a Top 10 in descending order, that is, from the tenth to the first position. It's worth remembering that this is our list, and that games re-released for free do count as a new title, as they reach a new audience.

Away from the controversy surrounding weapons on IOS, Overkill 3 can unleash all its violence in a shoot-and-cover-style shooter. The game is actually quite simple, both visually and in terms of gameplay, but it won the tenth position for its unusual cooperative mode. A fun idea that could be implemented in other games of the genre.

World War II always makes for good shooting games. Frontline Command WW2 is average, but good enough to entertain the player for hours amidst trenches and gunfire from the 40s. The game follows that distinct freemium style of Glu mobile, with sequential missions and power limiters.

One thing that stands out in this FCWW2 is the art on the loadscreens, pin-up cards that were quite popular at the time. Unfortunately, the game does not follow this pattern of references. The stages are very short, but at least varied enough to warrant a ninth position in our top 10.

Defeating Sky Net in a desperate fight is a storyline that could make for a great game. Unfortunately, this one isn't a great game, but it's still one of the best games of its kind in 2015.

Gameloft may no longer be that innovative company of the first decade of the 2000s, but it is still one of the companies that knows how to make the most of the graphics potential of smartphones. The guys literally used all sorts of techniques to make Sniper Fury look jaw-dropping.

All this graphic beauty yields a game with varied missions in one of the best sniper games for Android, to the point of leaving Hitman Sniper off the list. Of the shooting games where you "don't walk" this is, by far, the most beautiful released so far.

Unkilled is the spiritual successor to Dead Trigger 2. Designed for a wider audience, the game features the same type of gameplay (walk and shoot), but with sequential stages and less hassle when buying weapons.

Neon Shadow isn't exactly a 2015 game, it's an old paid game that has been updated and re-released for free by Crescent Moon Games. Its main strengths are a simple and straightforward campaign with fun stages, allied to a nice story.

But what puts the game in evidence again is its multiplayer for tablets. It is possible to split the screen and play versus games with a friend, on a single device. A light game, well done and without the boring monetization system of freemium games.

Brothers in Arms has always been one of the most important shooter franchises on mobile, even before iOS and Android dominated the market. The series finally got a third chapter at the end of 2014. But with a problematic launch and lacking some resources, it wasn't until 2015 that BIA 3 reached its full potential.

Varied stages, many missions, possibility to play offline and multiplayer mode. Brothers in Arms 3 has everything you would expect from a good shooter. It could be in the top 3 of the best of 2015, but luckily for us, 2015 was a year full of big surprises.

Link to download on Google Play – Brother in Arms 3

Some games are marked by a simple rule: if something moves, shoot it! Dead Effect 2 is the direct sequel to the popular space zombie game and takes this rule to the letter. With intense action and a lot of violence, this mix of Dead Space and Doom puts the player on a spaceship full of unsuccessful experiments.

One of the great merits of DE2 is that it brings above-average graphics quality even on modest smartphones. Another element that draws attention is that the producer maintained a good narrative line and sense of progression, even in a free-to-play game. Your only flaw? Not having a multiplayer mode.

The year 2015 started straight with a bombshell on Google Play. NOVA 3 won a free version that owes nothing to the originally paid game, released in 2012. On a platform where players are very fond of free games, NOVA 3 demonstrates the quality that paid games have and why they deserve our support .

Long campaign, amazing weapons and interesting story, show a Gameloft very different from today. For that very reason, this re-release deserves the second position in our top 10, to remind us of what mobile games should be like. The game came in second only because it was a re-release.

NOVA 3 could easily be at the top of the list, if it weren't for these two little friends from the east. We Shoot and CrossFire Mobile are multiplayer-focused FPS games that capture the addictive essence of the genre's top PC titles.

The graphics might not be great and the ping might be high, but the fact that it has modes identical to games like Blood Strike, Cross Fire, and Point Blank, puts We Shoot and CrossFire at the top of the list. Even with freemium elements, these two games do everything right and show a very different future from that proposed by western companies that always want to reduce both gameplay and fun in the name of a few bucks. We can't wait for Tecent Games to bring either of these two shooters to the West.

In Spain, We Shoot was so successful in the Modern Combat 5 player community that it is a recurring topic in several Gameloft community threads.

Top 10 Best Shooting Games for Android and iPhone of 2017 ❯