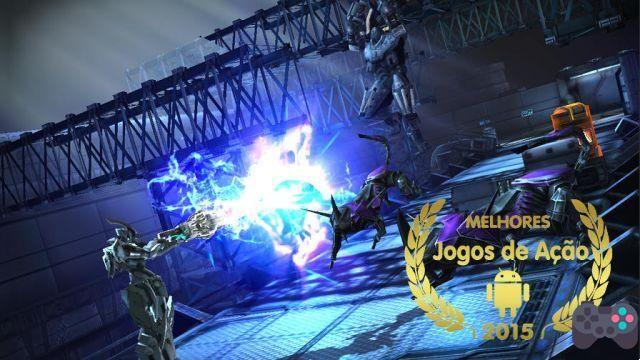 Being one of the favorite genres of kids, action games on cell phones have been divided into several smaller genres and mainly payment models. In an incredible mix between paid and free, there is no shortage of action in one of the best tops of the year! Check out!

Godfire Rise of Prometheus is one of the love it or hate it type action games. Released at the end of 2014, the game deserves to be on the list, as its true potential was only reached during the year 2015. Several problems were solved, but the gameplay is still a little slow for those who wanted a God of God-style hack'n slash. War. Still, the game is worth playing, because the graphics are very beautiful and it is possible to complete the game without spending a penny.

Relic Run is a mix of action and infinite running with lots of shooting and extreme escapes. Quickly becoming one of the best games of its kind, Lara Croft Relic Run is one of Square Enix's most successful games in 2015, so much so that he was sharing the producer's stand with other games for consoles during E3, the world's fair for games. Great graphics, varied gameplay and lots of challenges earn it a well-deserved position in our top 10.

Marvel Future Fight is an RPG that works perfectly as an action game. Face the end of the world alongside the heroes and villains of Marvel Comics. Set in one of the most famous comic books, the game gives the player the obligation to form a team and fight to change the future. The combats are in real time and there is the possibility to control the character as if it were in a beat'em up.

2015 is the year of Star Wars, period! The amount of games released for the franchise was impressive. Among them, Star Wars Rebel: Missions stood out as the official game of the new animation focused on the rebellion. The differentiated style of graphics combined with side action, base building and especially, the ability to use lightsabers, made this game stand out with ease. One of the coolest things about the game is the ability to play offline.

Here begins the real selection of the best of the best. In Til Morning's Light, you control a girl named Erica. She is challenged by her classmates to face the dangers of a haunted mansion. Offline gameplay, great graphics, good lighting effects, this game is just amazing! Unfortunately, you have to buy it from the US Amazon App Store to play. Which is currently very complicated.

Minecraft: Story Mode mixes action and adventure with the unique features of Telltale games, combined with all the mysteries surrounding Minecraft. Divided into episodes, in this game you assemble your character and participate in a fun adventure in Spanish. The game has a lot of dialogue, but there are moments of action and exploration.

In fourth position, a game that mixes exploration, shooting and strategy. Space Marshals is one of the most obscure and little known games, but it is also one of the best action games for Android of 2015. Don't expect to find a shooter with an isometric view, casual action and energy meters. Space Marshals has “broken” action, as it focuses more on exploring and developing your own story. In the Wild West in space, the player wins, who can enjoy one of the most balanced titles of 2015. A beautiful example of how mobile games should be.

Oddworld: Stranger's Wrath is a third-person combat and exploration game released in December 2014. Just by looking, you can already see how much “value” there is here: a rich 3D environment, elaborate story, interesting characters and lots of action . In this adventure, you need to hunt monsters to collect rewards. In 2015, the game received an update that greatly improved compatibility. Currently it is possible to play even on cell phones and tablets with 1GB of RAM and only two cores.

And the winner for the best action game of 2015 is…

Developed exclusively for smartphones and tablets, the importance of Implosion is indisputable. The title feels like a futuristic “Devil May Cry” with great action and lots of story. Those who are going to play just running over the gameplay, crushing their finger on the screen, will not notice the intricate system of evolution of the mechas and especially the combo system, which requires a certain skill to be used.

The visuals are excellent and the story, although complicated, is surprising for being entirely in Spanish. There are some glitches like stages, but the boss battles make up for this problem and future updates promise to add new characters and stages. Anyway, Implosion is the perfect example of how a paid game should be presented on Android.