TOP 10 Android Games with the Best Graphics of 2018 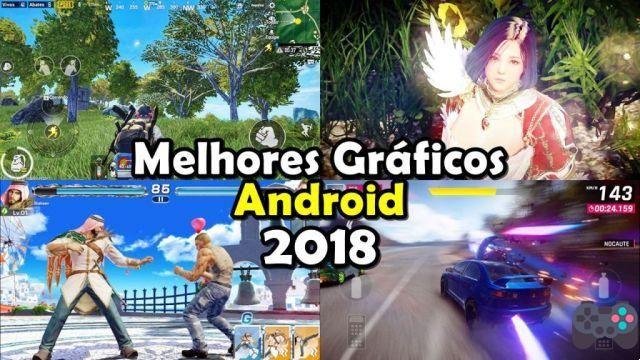 Meet the 10 Android Games with the best graphics, the most realistic and console-level that have been released so far. The list covers the first half of 2018. If you've recently purchased a smartphone, try downloading these games to test on your new device.

The year 2018 will definitely make a lot of people change their device. The amount of high quality games that require a good smartphone only increases. Anyone who decided to put off switching from that old Android intermediary may already regret it, as the best releases today require 3 GB of RAM or more.

Notice: This list is a little different from the previous one, which still included Android games from 2017. This time, we only list the games released in 2018. It is worth remembering that the list refers to the first half of the year. At the end of the year comes part two.

This game surpasses anything you've seen before, in terms of visual quality in Android games. Asphalt 9 uses several console-level techniques such as: Full HDR Pipeline, Tone Maping, Difuse Lighting, particles and many other shaders and post processing effects.

In Asphalt 9, some cars have more than 90 polygons, that is, more triangles than some racing games on current generation consoles.

Developed by Gameloft's Barcelona studio. Asphalt 9 uses the Jet Engine, which has incredible compatibility, something rare today for the producer's high-end device-focused games.

Asphalt 9 is without a doubt the mobile game with the best graphics of 2018 (so far).

The game released in South Korea is playable in Spain. Just download the APK. But it's not a title for everyone.

You need a really powerful smartphone to be able to see all the beauty of Black Desert Mobile. If this is your case, then get ready to see a game that looks very similar to the PC.

The graphics level of this game is impressive. However, if your device is only intermediate or an old top of the line. Most likely it will run Black Desert in medium or low resolution.

PUBG Mobile is another example of a game that runs on many devices, but shows all its beauty, only on high-end devices.

Options for the best graphics like Ultra HD and HDR+ are only available on a few rare devices. If that's your case, congratulations, your smartphone is really powerful.

In addition to these settings, PUBG Mobile can run at 60fps and with realistic color theme. Leaving it one of the games with the most realistic graphics on Android.

Fortnite is an impressive technical achievement. Something unimaginable 2 years ago. Epic's game was converted to Mobile without leaving anything to be desired. Even the servers are the same, and mobile players can play with PC or Console players.

The graphics can only be beautiful on consoles, but it's impressive to see the hottest game of the moment run just like a Galaxy S9 or Mi8. This conversion challenged the gaming market. Thanks to her and PUBG Mobile, people got the impression that any game can be converted to Mobile.

Fortnite is the most demanding and heaviest mobile game today. Until the moment of the release of this video, it is only possible to play it on a few Android devices, but believe me, it's only worth it even on the top of the line.

After a lot of soap opera, Blade 2: Return of Evil was released on Android (only in South Korea, but just download the APK). The game, like others on the list, uses Unreal Engine 4.

In terms of gameplay, we have an RPG that abuses the action with impressive combat scenes. Unfortunately, it suffers from the same disease as many titles of the genre, the infamous automatic mode, but the visuals are stunning.

For those who want to know what the future of graphics in “ordinary” Android games will be like, you need to download Blade 2 right now.

Shadowgun Legends was not the success it deserved to be. The shooting game focuses on the singleplayer and co-op experience. However, he came at a time when those who are fans of shooting games only want to know about Battle Royale.

Still, you can't help but be stunned by the graphics of this game. As if that weren't enough, Shadowgun Legends presents a beautiful look even on low-power devices.

In a world where everyone is only looking for games with Unreal Engine 4, Madfinger's work is impressive, showing that Unity 5 is as powerful as Epic's graphics engine.

Shadowgun Legends has an option to set the FPS to 60 frames per second.

Nexon was the company responsible for starting this revolution in Mobile with Unreal Engine 4. I know, other companies had already bet on this graphics engine in cell phones, but it was only with HIT 2015 that the world woke up and saw that cell phones could run games with incredible effects, worthy of consoles.

A lot of time has passed and Nexon has brought us another game with a similar proposal: Darkness Rises. The RPG with strong heroes and short-dressed heroines leaves anyone with their mouths open.

The difference here is the story. The game has a narrative that is told using real-time graphics. And best of all, in Spanish.

Cyber ​​Hunter is still in testing on Android and iOS, but this game deserves to be on the list. For the first time, we see NetEase try to really get out of the box and build something new. Cyber ​​Hunter looks like a mix of Fortnite with Crackdown and Call of Duty 4.

The game is full of futuristic weapons and new mechanics. One of the most beautiful Battle Royale games on mobile phones. Beautiful and different, by the way.

To give a feeling of loneliness and penury, lost among the rubble of Chernobyl, it is necessary to have at least quality graphics. Escape from Chernobyl ticks all the boxes and offers an immersive experience.

The game features a faithful reproduction of Chernobyl's reactors and a terrifying atmosphere. Face zombies and try to survive the radiation in this inhospitable climate.

As with many games on this list, when starting it is necessary to adjust the graphics to obtain the maximum quality.

Just a warning: the beginning of this game is absurdly boring, but it gets a lot better after the first half hour.

The only representative of fighting games on our best graphics list, Tekken Mobile can disappoint in many ways, but in graphics, the game doesn't look bad. This game is heavy and will disappoint those who expected to run it on a weak cell phone.

The game runs at a steady 30fps, making the player enjoy an exciting fighting game. Even if the commands are basic (swiping the screen), at least Tekken Mobile doesn't have automatic mode.