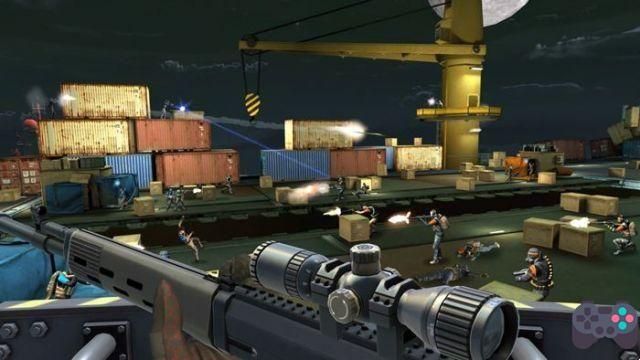 Tom Clancy’s ShadowBreak is a Sniper-style shooting game, but with a differential, having elements of cardgame and strategy. The player commands troops that must be placed on the battlefield. But, you can shoot enemies too. Scheduled to Android, iPhone and iPad, the game is in soft launch on iOS.

The differential of the game, in relation to games like Sniper Fury (Gameloft) is the focus on multiplayer. In Tom Clancy's ShadowBreak players duel in arenas where they need to help their troops with the use of a sniper rifle, just like in real life. It's an interesting approach, which many producers have certainly not thought of.

It looks like a mix between Sniper and MOBA, but here you are the only player. You have to defend your territory and prevent your opponent from destroying your troops and buildings. Remember a certain game? So do we.

In the "leveling" part, the game takes on characteristics of the Clash Royale game. Soldier cards need upgrades to get stronger. Oh, and don't worry, they copied the chest thing too.

It seems that the Clash Royale model has been the envy of game developers. After Gameloft announced Blitz Brigade Rival Tactics, Ubisoft brings us Tom Clancy's ShadowBreak. The latter, an interesting proposal, as it combines FPS with strategy.

For now, Tom Clancy's ShadowBreak is only available for iOS and in soft launch (Canada App Store). But from the gameplay, we can see that the game is practically ready.