The Dark Knight Rises, one of the best games on Android and iOS

I'm not a comic book fan, but for those who are looking forward to seeing the movie, I don't recommend buying and playing the game before the movie. Totally based on the work, the game has many scenes, characters and references that can spoil the fun of the most Shiite fans. To be honest, I don't think that can happen, any person with good sense can taste both without getting shiism because "there was a lack of this or that".

So, if you're avoiding reading and seeing anything about the movie to avoid spoilers, I don't recommend reading this review of the game.

All right, let's get to the game. “The Dark Knight Rises” It's an excellent action game with elements of espionage and stealth action, mixed with melee combat and a mix of linear phases with parallel missions.

With a beautiful soundtrack and very good sound effects, the atmosphere of the game is complemented by a 3D modeling work that borders on the limits of the mobile platform. It is a game to “impress” friends, like Infinity Blade and Asphalt 7.

The commands may not be exactly what many expected, but they certainly fit in very well with the touch screens and the game's proposal, which despite being a "console experience" is far from replacing it. The moves are performed with just one button, hitting, there are no options to increase combos or vary the attacks.

Despite this, the bat has a very simple “counter-blow” button that helps a lot when you are surrounded by enemies.

I read a lot of reviews out there where they compared the game too much with fantastic games for PS3 and Xbox like Batman Arkham City. Totally unfair and disproportionate comparison. It's like comparing a 1.0-liter car with a Ferrari.

The good old bat is back in shape better than ever in a smartphone game. With cool moves and natural movement, the Batman in this game has impressive moves such as gliding in the air using the bat cape (sorry, I couldn't resist). He has a hook (hookshot) that despite being kind of surreal adds an interesting gameplay to the game.

Batman talks with that husky tenor “voice” with no lip movement, but let's face it, we're talking about a cell phone game, you can't charge too much. At least the dubbing was pretty good.


In gameplay, my only gripe is the amount of bat-boomerangs. They are very useful and save a lot of time to take down bad guys, but they are expensive, so only use them in stealth missions.

The game starts very well, with a brief tutorial teaching how to play and the menu items, especially the ones to buy, Gameloft never gives up taking another one out. However, after getting out of prison, and that beautiful scene with Bruce Wayne climbing up his worst nightmare, a deep, dark hole. The game begins to fall into repetitive phases, not that they are monotonous, but those who expected to finish the game in less than 2 hours will have a nice surprise.

It's not all darkness in The Dark Knight Rises. A lot of bugs populate the experience of those who try to solve things in the game in a not very “orthodox” way. For those who have a mania, like me, to pull enemies with the hook, sometimes they are inaccessible, in the air or in the rubble of the city.

Many people reported on Android that the game usually closes by itself, this happens from time to time also on iOS. The funniest bug happened to me on the mission where we have to ride the bike. The button that looks like the accelerator of a car, brakes the bike, and what looks like a brake, accelerates. Below you can see some of these bugs found along the way. 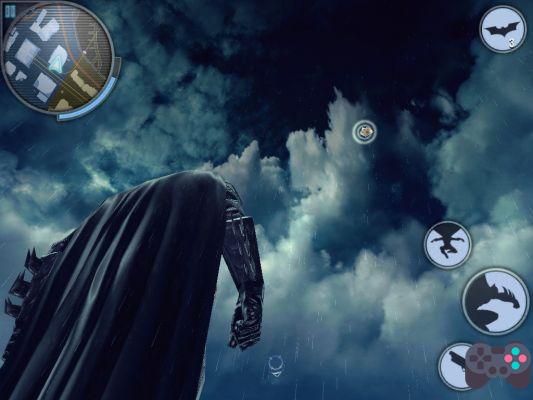 Was that supposed to be right there? 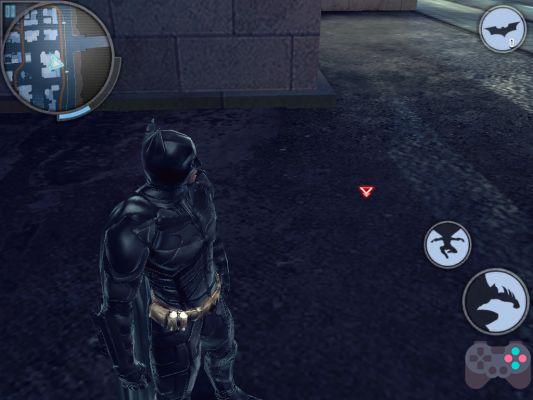 Where's the enemy that should be here to take a beating?

Batman – The Dark Knight Rises for smartphones and tablets is as epic as the movie it was inspired by. Many cinematic scenes await you (like the mega spoiler below). Gameloft has made another excellent Premium game with hours of fun. There are 27 missions not counting the free-run through the city. 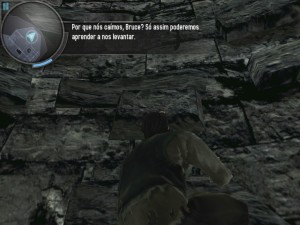 add a comment of The Dark Knight Rises, one of the best games on Android and iOS