The critically acclaimed “Journey” is released for iPhone and iPad 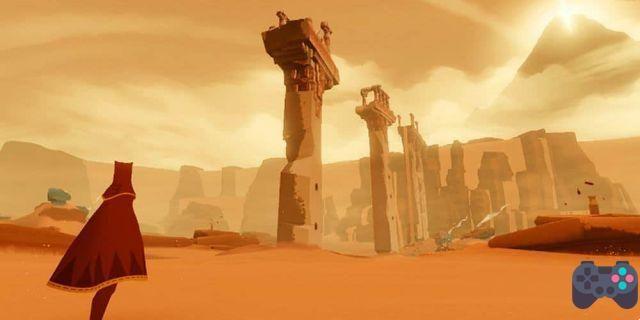 After having released Sky: Children of the Light, Thatgamecompany studio and Annapurna Interactive surprise with the release of the acclaimed Journey for iOS. The game was successful at the time of Playstation 3 and was recently also released for PC.

In Journey, the player controls a character who must travel through deserts and forgotten fields in order to complete his long journey. It is possible to play alone or in the company of another “traveler”.

A work of art in game form. With many abstract concepts, which promise a fantastic journey for the player.

There is no hint, dialog or tutorial of any kind. Such as Limbo, Journey showcases its gamedesign in an intuitive way. How should be.

Journey is still remembered today for its unique style, where the limitation of interaction between players is used as a resource in the gameplay.

Players cannot communicate at any time. Encounters are random, but acting together is essential.

Although the co-op mode is flashy, it is possible to finish the game alone. You can play completely offline.

Winner of several design awards and with outstanding music. Journey is a tremendous game that elevates the concept of art in video games. Expect to find many metaphors for life's difficulties here.

The game is good, but not recommended for older iPhones. Despite "proving" as compatible, make sure you run it at least on an iPhone 7 or higher.