The Best Mobile Controls of 2022

Check out the best smartphone controls of 2022, be them Bluetooth, USB e Type-C. We have selected only the best gamepads that will work in any situation.

There are hundreds of best controller lists on the Internet, but do you know what the problem is? The vast majority recommend controls that are out of phase, with delay, bad analogs or that do not work in some application.

I see a lot of people recommending very old controls, which will present monstrous delay in games, or bad analogs, just because they are cheap.

Here's a secret: there are better and even cheaper options than those controls that people usually recommend.

In this article, we will only recommend controls that are as compatible as possible. The gamepads that will work in the vast majority of games and situations such as: general use in games with HID support (native of Android), emulators or cloud gaming like Xcloud and Nvidia Geforce Now.

The first recommendation is obvious for anyone looking for quality and native compatibility.


Os PlayStation 4, 5, Xbox One S and Series S and X controllers are natively supported from Android 10 and iOS 14 onwards.

It's no use arguing, companies like Sony and Microsoft have more than 20 years of experience in building video game controllers. And all this build quality is now available to mobile users as well.

The price may be “salty”, but these controls have additional advantages such as the fact that they are theaccepted by default in competitive games like COD Mobile, Fortnite and Apex Legends. That's right, by default, no configuration is needed. Just pair up and start playing.

The PlayStation 4 controller is the cheapest in this category. The cheapest version costs R$ 259 on Amazon.

The Xbox One S and Series S controller is much more expensive, but in return it is a “war tank”. A control that will literally be “eternal” in your home.

Another positive side of these controls is their durability. Even if they have problems, the number of parts and people who know how to maintain them is immense, which makes repairs easier.


Note: I don't need to comment that control only original. These alternatives that sell in stores, we do not recommend.

Note 2: some people usually say that these controls have a delay. All control acceptable levels of delay on commands. To decrease the delay in these controls, just use this tutorial here.

Right after the original video game controllers, our next recommendation is GameSir controllers. Founded in 2010, this company is already well known to those looking for quality control in the market. She started out making controls for consoles, but after she bet on the mobile market, things only got better… for us mobile gamers.

the controls GameSir T3 e T3s They are the company's cheapest models. Much like the design of a PlayStation 4 controller, they differ only in connectivity. The T3 is only 2.4 GHZ (adapter) and T3s have Bluetooth too.

The button layout is Xbox standard, and compatibility is broad. Any application that supports many controls will support that control. However, as the price of the T3s comes close to the price of the T4 Pro, it may be more advantageous to invest in the new model.

O Game Sir T4 Pro It's a crowd favorite right now. It is simply the cheapest, most accessible and best quality controller you will find in the R$180 reais range.


A quick look, and you'll think it's just an Xbox-like controller. But when you turn, comes the surprise. Yes, it looks like the Xbox one, but the Elite version.

Ideal for use on mobile, tablet, PC, TV Box and even Nintendo Switch, the controller comes with a 2.4Ghz adapter, but it also has built-in Bluetooth. It also has a grip to attach your smartphone.

One thing that goes unnoticed by many people is that this control has Gyroscope too. So in some games for Android and Nintendo Switch, you can make use of this feature.

In 2021, the T4 Pro gained a “little brother”: the mini version. Much smaller, this version is ideal for those looking for an easier control to keep in their backpack or even in their pocket.

Launched in 2021, the G4 Pro looks like a reinterpretation of an old GameSir controller that was very successful: The G4S.

But isn't it better to buy the old G4S cheaper? Definitely not.

The G4 and G4s are very old and very expensive. The G4 Pro is the latest version with latest Bluetooth and gyroscope support.

The G4 Pro already comes with a hook to attach the smartphone to it, built into the controller itself.

Now we come to caviar, desired by many, the Game Sir X2 has become the “Holy Grail” of Android smartphone controls. The reason for this is the compatibility of this control (and X3) with the Nintendo Switch emulator, the EGG-NS.

Although the EGG-NS emulator is available for other controls, you have to pay a monthly fee. When purchasing GameSir X2 or X3, you don't need to pay for the emulator.

The controller's design itself is all inspired by the Nintendo Switch, and proves that Nintendo's concept is correct in many ways.

Snap hooks like the one on the G4 Pro are useful for small gaming sessions. But have you tried to play for many hours? The unbalanced weight makes holding the controller tiresome after a few minutes. Something that does not happen with the X2.

With GameSir X2, your smartphone literally becomes a laptop, and can be played in any position (sitting, lying on the bed, etc.).

The price seems high, but in the long run it pays off a lot. However, to emulate Nintendo Switch it is good to have a powerful smartphone. At least a Snapdragon 855 processor or higher is required. Anything with less processing power than the 855 will not be worth the purchase.

Warning: be careful not to make a mistake when buying your GameSir X2 controller: 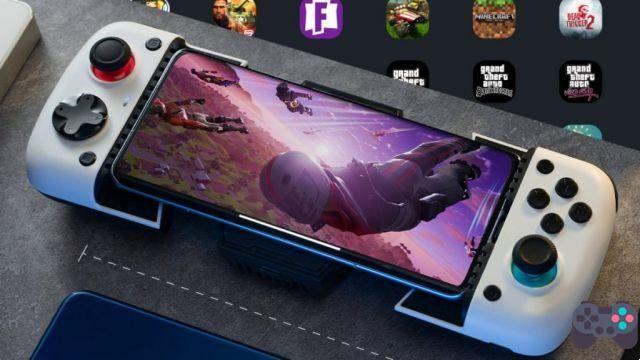 O Game Sir X3 is a beefy version of the X2, whose main differential is a condenser cooler active on the back of the control.

It is worth remembering that the X3 cooler is one of those coolers that “freeze” even the back of the smartphone. So expect very low temperatures, which will help your smartphone perform better during long gaming sessions.

The cooler makes sense, as the EGG-NS emulator, depending on the game being emulated, can make the smartphone get very hot.

But there's a little problem. The X3 controller cooler needs to be plugged into an external power supply to work. It doesn't have a battery. The controller's internal battery supplies power only to the buttons and analog sticks.

Ipega controls are already well known here on the site. With cheaper prices than GameSir, the quality of Ipega's controls usually follows the price reduction.

If you're a more casual gamer, you're looking to play games that aren't competitive or don't require a lot of precision.

These two Ipega controllers can be dubbed the “poor man's X2”. Ideal for those who want a control and grip scheme that resembles the Nintendo Switch, but are not willing to pay more than R$139 reais.

O PG-9167 It has a more modular design that allows, for example, to attach a headset and even a tablet.

The PG-9217 has a more compact design and is similar to the Nintendo Switch.

But on both controllers there is no input to charge the smartphone directly from the controller.

O Ipega 9076 is a Bluetooth controller for Android and iOS that looks similar to the DualShock of the PlayStation 4.

Compatibility is great, but the build quality isn't as good as GameSir's controllers.

However, one of the great positives of the controller is the battery life. It's about 15 hours of gameplay.

O Ipega gamepad PG-9220 It is the latest controller from this manufacturer. It would be Ipega's answer to GameSir's T4 Pro.

The control is very complete and full of extra commands like two triggers on the back and two on the side.

The quality is above average for other older Ipega controls.

There are a plethora of Ipega controllers for sale on stores like Aliexpress, GearBest, and Banggood. However, most are old controls, and even priced 10 or 20 reais less than the newest ones, they are not worth it in the long run.

The Best Android Games on Sale This Christmas ❯

add a comment of The Best Mobile Controls of 2022