The Best Battle Royales that will “die” soon (Android and iOS) 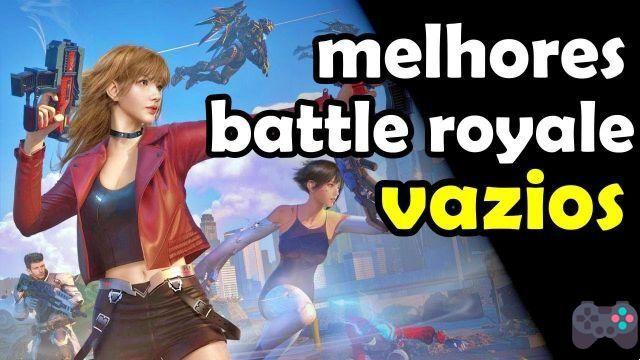 Check out the games Battle Royale that are very good, But anyway are not so successful how much they should.

Like every new genre, Battle Royales captivates a legion of fans. But it wasn't just gamers who were caught up in this wave, many developers took the opportunity to surf and create their own games.

What started shyly back in 2016 has turned into a multi-billion dollar fever that continues in full swing into 2021. This is especially true on Android and iOS.

We've had a flurry of mobile Battle Royale games since 2017.

But something curious happened.

Instead of fans fanning out around various games of the genre, as happened with MMOs,

Most of the Battle Royales audience, on mobile, was restricted to just 3 games: PUBG, COD and Free Fire.

Many great games have tried their way into the sun, but are failing.

The games that we will mention in this list are good games.

And it doesn't even come with that chat that it's enough for the game to be good to be successful. When it comes to online games, hype and updates count for a lot. After all, it is not for nothing that they are “games as a service”.

Check out the best Battle Royale games for Android and iOS that will either close their servers soon or become “zombie games”.

This video is based on an article we wrote in 2020. At that time, Cyber ​​Hunter still had a relatively active community in Spain.

But the game's setting died around here and it seems it died out there too.

Cyber ​​Hunter is on the borderline between small success and failure.

According to the Sensor Tower website, game downloads and amounts collected are reasonable for any mobile game, but not for a Battle Royale, which is a style that demands a lot of servers and constant content updates.

The game's social networks are still active, and it continues to receive content. What's wrong then?

It just seems like no one is playing on the LA and NA servers. Matches take forever to start, and even then, the game is clogged with bots.

Despair seems to have taken over the developers who even tried to implement an "Escape From Tarkov" mode in the game.

Cyber ​​Hunter is one of the best futuristic-themed Battle Royale. This game implemented several mechanics that exist today in games like Free Fire, PUBG and COD.

What the hell happened to Super Mecha Champions?

Remember the hype of this game? The recipe for success seemed to be there: a Battle Royale with anime looks and giant robots!

That was something for the otaku to freak out!!!!

Since launch, Super Mecha Champions has never been a download hit! The game was very heavy when it first appeared, but it got lighter as the audience changed devices.


The game still receives updates and content, but when playing we have an even worse impression than Cyber ​​Hynter.

Around here, the excuse of the players is that the game is too heavy. But in reality, people test it out, think it's cool and go back to their usual game because “they don't have time for another Battle Royale”.

By the way, there is an article on the site about this phenomenon of many gamers being “mono-gamers”. Link it here.

The concept of Super Mecha Champions is amazing and if the characters and lore were better explored, I think the game would have the potential to go viral as Genshin Impact. But it didn't.

Omega Legends has one foot in the grave…

Yes, but better doesn't mean it will be very successful. Huh? There's Free Fire that doesn't let us lie.

Everyone, including fans of frifas, knows that there are better games. But they play frifas for a simple reason, it runs on any cell phone.

Omega Legends is a very light Battle Royale that was developed by a small Chinese studio.

A game where you choose "legends" and each one has a unique ability. A concept that was cool and was implemented in a very creative way.


And what happened? Because it did not work?

Well, it seems that IGG expected a huge return with Omega Legends. The publisher bought the game's studio, SkyUnion and with it other games. After the acquisition, the game stopped receiving content and even social networks stopped updating.

Recently IGG “forgot” the game by mentioning its best mobile titles… is it soft?

There's also the fact that a lot of people see the game's movement and think it would be a lightweight Fortnite for cell phones.

We don't know, but the fact is that Omega Legends is empty today and it looks like the game is going to go out of business very soon. But it's not the game's fault, it's very good.

Ride Out Heroes is the right name for a game that could disappear in 2021. With only 25 monthly downloads, which is very little for a Battle Royale.

It was launched in 2018 and already breathes with the help of devices. Which is pretty weird, because looking at the trailer, Ride out Heroes looks amazing. Playing this impression is confirmed as well.

The idea of ​​mixing Battle Royale and RPG is ingenious, but it's not new, The game is a copy of Realm Royale (a game that is also floping).

It's been 3 years since the launch on Android and Ride Out never took off.

The big problem is the lack of players.

The most recent season helped the game get out of the abyss it was in, but there is still a long way to go.

This is going to be that kind of game that disappears and no one misses it.

Looks like the bet on a copy of Realm Royale didn't prove to be a good idea after all. What a shame.

Certainly Disorder is that game that has already flopped.

The game has barely been released and is already among those listed to go bankrupt soon.

Disorder has an average of less than 20 monthly downloads.

The game has a different idea of ​​Battle Royale.

But it turned out so different that it may have stunned some players.

Confusing storyline, messy battle mode and heroes who want to be from Apex Legends without being in Apex Legends.

The result is a confusing game and maybe that's what has turned many players away.

It seems that age has caught up with our dear friend Rules of Survival.

Do'nt know? The game was born as a mod of the Chinese game Terminator 2, released in June 2017.

Months later, in August, came the idea of ​​launching a Battle Royale mode, inspired by the biggest hit on PC at the time, Playerunknown's Battlegrounds. That's when the company noticed the “gold mine” in its hands. The game immediately became the most played in China.

The global release of Rules of Survival took place in November 2017.

Yes, Rules was released just 45 days after Free Fire. It came to Android and iOS as a standalone game and separate from Terminator 2.

NeEase's game shaped not only the company's future Batte Royale but other games. Since Rules has always had a futuristic feel, something we see today in Free Fire, PUBG Mobile, New State and many others.

Rules of Survival and its “younger brother” Knives Out were very successful outside Spain. Today Rules is down, but Knives Out is still going strong in Japan.

And with that we close our list of the best Battle Royales that may soon die. If you haven't seen our video with the best games of the genre in 2021, check it out.

Anyone realizes that this genre is saturated. There are too many games and too few players, as most players have already tested or play another game.

Missing games with new ideas? No! What is lacking is the continuous support of the producers, because it is not enough to launch the game, it is necessary to invest in continuous support and a more friendly compatibility, especially with the average Spanish audience.

What hyped game do you think will die soon? Leave a comment, a big hug and until next time!

The Best Mobile Controls of 2022 ❯