If you bought a smartphone in 2021 and want to know if your device is really mad and can handle the bump, you are in the right article.

This is the ideal post for those who want to see their cell phone give the most or try, because the games here are so rough.

The list of heaviest games for Android is an excellent opportunity to see if your smartphone is really worthy of being called top of the line, or is it going to give up and play everything on low. 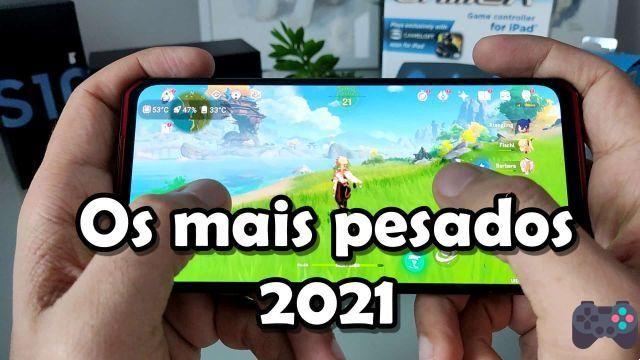 It is worth noting that they are the heaviest, both in size and in terms of processing. So take the 32 and 64 GB devices out of the room because the stuff will stink.

Just like last year's video, it's worth remembering that the numbers in gigabytes are from clean installs.

When it comes to mobile games, it is common for updates to accumulate a lot of unnecessary and repetitive data. If it's an old game, it can easily go from 10 GB, but when installed from scratch, it will take up much less.

The first game on our list couldn't be another, FF.

But it's not Free Fire Max, we're talking about a game that really requires a good smartphone to run.

Final Fantasy 7 The First Soldier might not be heavy in size, but the Battle Royale/RPG is already enough requiring at least 4GB of RAM.

And if you have an old smartphone with that amount of RAM, you will be able to run this game. Suffering, but go.

Racing Master is the new racing game by NetEase. And as we know, when a game of it comes out, we can already expect someone complaining that it didn't play.

It was exactly the case of Racing Master.

In the first beta the game was stupidly beautiful, but it only ran on top of the line.

Guess what happened? The company made it more “friendly” to intermediaries, but in return, the game got a lot uglier.

The effects of reflections on the track have been turned off and even the night race is no longer available. However, it remains a heavy game.

XCOM 2 is the sequel to the world-acclaimed strategy game where the player commands the last resistance against the aliens.

Like its predecessor at launch, XCOM 2 is a terror to run on both Android and iOS.

On Android, the biggest difficulty is not even compatibility with top of the line, but many effects that were covered to make the game lighter.

And it didn't even help, it's heavy as hell and will occupy at least 5.12 GB of data.

At the time the game was announced, 2K startled us by informing us that they needed at least 17 Gigabytes free to avoid any problems with updates.

Not that heavy, but with the possibility of being quite heavy over the years is League of Legends Wild Rift.


The game barely completed a year of its release and is already with 5.15 GB. It is worth remembering that this type of game will gain dozens of updates with skins and more skins.

But to tell you the truth, Wild Rift isn't that heavy, it's more a question of how the game will behave with future updates. There are already people with installations with 6 to 9 GB.

But it's worth what we said at the beginning of the video, when uninstalling, installing again, and downloading all over again, the game didn't seem so great.

Netmarble's latest cinematic RPG might be an all-automatic epic, but it's still one of the best looking games of 2021…. and one of the heaviest too.

Get ready to reserve 5.84GB of space on your smartphone. In addition, just like Wild Rift is a game that will have many updates with skins.

In the game, new heroes, who are sons of the original knights, will face bosses who killed their parents in epic battles. The game has a different combat system, but unfortunately ends up being cannibalized by the automatic mode.

In the heavy game class, it seems that Netmarble repeated the year.

The company also released in 2021, Marvel Future Revolution another RPG with amazing graphics.

Interestingly, for this game, Netmarble wanted to be a little more friendly, and left the game very well optimized.

Marvel Future Revolution runs fine even on older mid-range devices, but of course, turning off all effects.

Oops, did you mean PUBG New State no?

No no, it's the mobile itself.

Although PUBG New State has had several performance issues, the game is surprisingly compatible.

Who complains is the guys who want to play with everything on ultra, recording and streaming. Then any cell phone will cry, right?

New State's only problem currently is on iOS, where the game debuted with stuttering, those stuttering. But the video here is about Android.

And especially on Android it turned out to be well optimized.

The same can be said of PUBG Mobile. But as it is an old game and with many expansions, get ready that here comes the bomb.

After we download everything, we have the surprise. The child takes up a ridiculous 8.4 GB of space.

Call of Duty Mobile is another game that is already showing the first signs of age. Despite it being very compatible, after you download all the packages you will be surprised with it taking up at least 9.86GB, that's right, almost 10 Gigas!!!

What seemed to be a joke in 2019 has become reality in 2021. The most popular games are extrapolating the easy 8 GB.

As they say around, how the child grew up huh.

The only option for the 32 or 64 GB guys is to delete almost everything from the cell phone.

Our tip is to use Google Photos storage in at least 3 accounts and send what has already been downloaded to the cloud.

Year in and year out and Fortnite will be lighter on mobile? No!

The game that is the perfect conversion of Battle Royale on PCs only gets heavier and heavier on cell phones.

Fortnite continues to run at only 30 FPS and with many effects turned off.

And there will be a lot of devices that the resolution will look less than 720p.

Genshin Impact is what we can call a “large animal”.

Think of a heavy game.

It's heavy on mobile, it's heavy on PS4 and if you have a gaming notebook and plug everything in, it's going to be heavy on it too.

Only those who have a PC gamer can enjoy this beauty with everything on the stalk.

On the cellphone? just call to see the back of the device turns into a hamburger frying plate.

The game has become the new benchmark test for devices, as literally none of them can reach 60fps for long on maximum settings. Just start the fights that the frames drop.

And there's more, you think it's over.

On a mobile scale this game has the density of a neutron star.

A year from now, what will Genshin Impact have? 20 GB??? Then only time will tell.

Want to know when it all went down here? Only the 10 games on the list weighed 75 gigs! Enough to make any 128GB smartphone user worried.

And with this terrible disappointment we end our video. Next year we'll come back to find out how the heaviest games will be in 2022.

add a comment of The 10 HEAViest Android Games in 2021