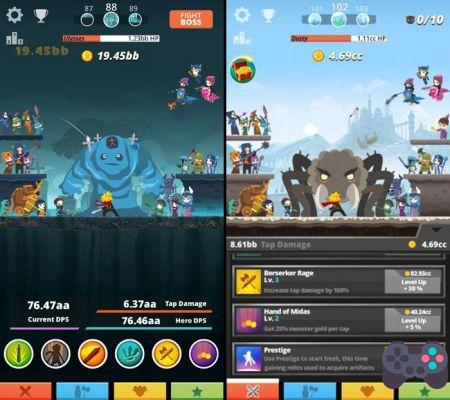 In Tap Titans, the player is a young warrior whose mission is to detonate giant monsters. By tapping the screen, your character throws blows at enemies. The name Tap, no wonder, the game is just that. The important thing in this title for Android, iOS and Windows Phone is to evolve your hero and summon companions into battle.

At first, I was afraid of RSI (Repetitive Strain Injury), but the simplicity of Tap Titans is addictive. In the beginning, the game is very easy. Just wait a few minutes for the fun to really start, when the game's bosses become beatable and you'll have to spend the money you earn on upgrading weapons, shields, and even leveling up your teammates.

Repetition, both movements and combats, is the main element of the gameplay. Who takes the game out of this repetition are the 10 different continents, each with monsters at higher and higher levels.

One of the positive points of Tap Titans is the possibility to play completely offline. For those who like achievements, don't worry, when accessing the game with the internet on, it will sync all the data and the achievements will appear in your Google Play account. Tap Titans is a light and fun game, a casual game with a different proposal and that yields fun anywhere.