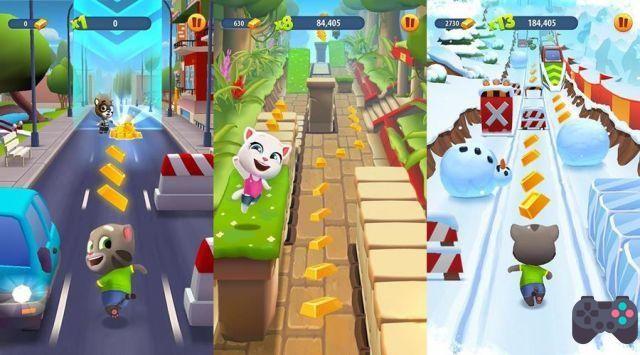 Talking Tom: Gold Rush is an endless running game for Android and iOS. In the best Subway Surfers style, the objective is to help Tom the kitten to chase a bad guy who stole his house. The game has a colorful look, good humor and a gameplay that will fall in love with the kids this holiday season.

Tom the Kitten, Angela and their friends will embark on an adventure with a lot of rush to stop a very naughty little thief. Talking Tom: Gold Rush is anything but original, but its graphics and gameplay are very well done. The producer Outfit even tried to introduce a construction element, but which is really in the shadow of the classic Subway Surfers.

The player's mission is to collect the gold that the bandit drops along the way. Other than that, we have the same power-ups as Subway Surfers like magnetism and a jet to fly.

Talking Tom: Gold Rush successfully repeats the Subway Surfers formula. It's a great game to pass the time. Although they contain in-app purchases, they are completely unnecessary. The cute look of the characters will appeal to anyone who is a fan of Talking Tom and Angela.