Sword Art Online Alicization Rising Steel was released on Google Play and App Store in Spain. The game is an RPG with a massive focus on the story and 2D animations. The game is available for free to download from Android and iOS. FreeBut requires internet connection.

Until the year 2019, no Sword Art Online Android and iOS game had been officially released in Spain. That's right! Integral Factor, Memory Defrag and several other SAO games never arrived here. The games existed in stores in other Latin American countries, except Spain. 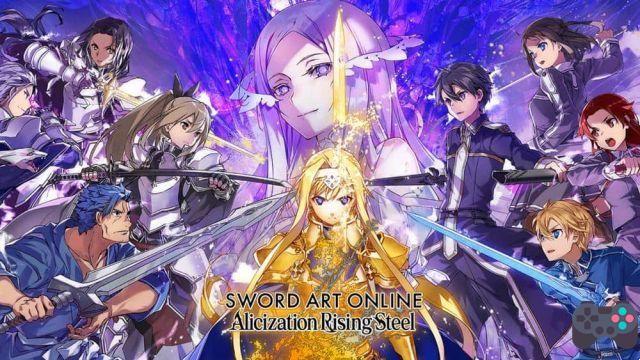 Bandai Namco had an absurd pet peeve with Spain. She even gave DMCA strikes on sites that advertised SAO APKs in Spain. This even happened with our blog.

But for some time now, it seems that Reki Kawahara and other rights holders of the SAO franchise have put their foot down for global releases of their games. There were two releases in a short space of time Crossing Void, which has several characters from the anime, and Alicization Rising Steel.

The big problem with Alicization Rising Steel, which may disappoint some fans, is the fact that this game focuses on story and turn-based combat. There are few areas where the player has freedom of movement.

Whoever thought that the first SAO game available in Spain would be an MMORPG is very wrong. There aren't even three-dimensional scenarios. This may disappoint anyone who was expecting an action game in the style of Honkai Impact or the like.

Sword Art Online Alicization Rising Steel is more of a “gacha game”, where the main objective is to follow the story and collect characters. Each character has a level, skill tree, etc.

However, those who enjoy anime games, and understand a little English, will enjoy the animations and dialogues of SAO Alicization Rising Steel. The character design is literally an "anime", as the game is all in 2D.