Stumble Guys: The Best Clone of Fall Guys for Android (with multiplayer and SA server) 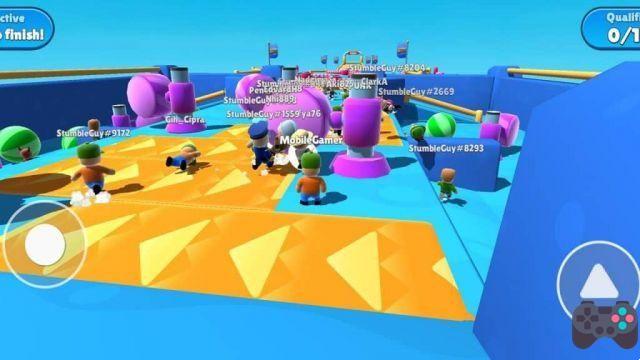 Stumble guys is definitely the best Fall Guys clone so far in Android. The game has a real PvP multiplayer mode, with the right to invite friends to an online dispute.

In our Run Guys post, posted earlier, a lot of people commented on Stumble Guys, which was a better Fall Guys clone and had real multiplayer.

We tested the game, and it really is much better than Run Guys!

The highlight of Stumble Guys is for sure its PvP multiplayer, no mistake. The game has servers around the world and even a “Party” mode, where you can invite friends to a dispute.

The scheme is the same as in Fall Guys. But here the developer already had a brilliant idea. At the beginning of development, he limited the games to 32 players, and placed servers in several parts of the world, including a South America server. This helps a lot to find matches faster and lower latency (ping).

The gameplay is smooth and even supports input devices. The commands are the same as in Fall Guys, although your character is a little less “silly” when it comes to falling. There aren't many places to troll others either, but I bet the community will get creative soon.

Anyway, Stumble guys is a great option for anyone looking for a mobile version of the success of Devolver Digital. The game runs smoothly, the ping is below 70ms, and it takes inspiration without copying too much, which is important not to get banned from Google Play.

Great tip from the community! If you know a good game for smartphones, recommend it in the comments.

Submerged comes to iPhone and iPad with high requirements ❯

add a comment of Stumble Guys: The Best Clone of Fall Guys for Android (with multiplayer and SA server)