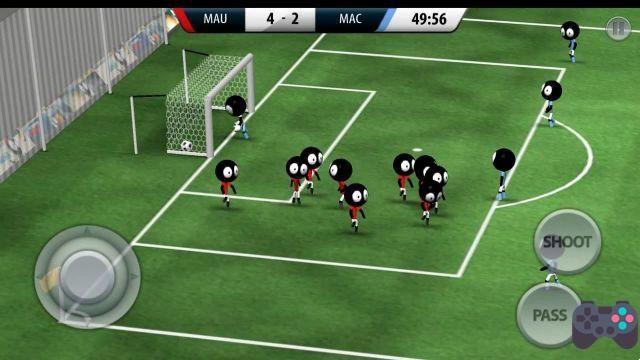 Stickerman Soccer 2016 is a soccer game with more simplified rules. There are no fouls (only in the goal area) and offsides. The thing about the game is the fluidity of the gameplay and you can shoot from any distance, go out with the goalkeeper and try to score, etc.

The controls are simple, an analog to move your players and two buttons, one for kicking and the other for passing. There are no elements like fatigue, energy limiters and even team building. It's just playing like a madman and trying to score goals.

The game has several leagues and some require you to be online to access ad videos and unlock them, but others can be played completely offline. It would be a waste of time to buy all the leagues and play completely offline, if it weren't for the game's achievements on Google Play Games, which yield good points for your ranking.

Stickerman Soccer 2016 has multiple difficulty levels. It's that typical casual pull-and-play game. The game sins for not having a multiplayer mode between devices. Instead, it has a multiplayer mode that requires multiple bluetooth controls. A completely rare scenario, but if you have multiple controls, it's worth a try.