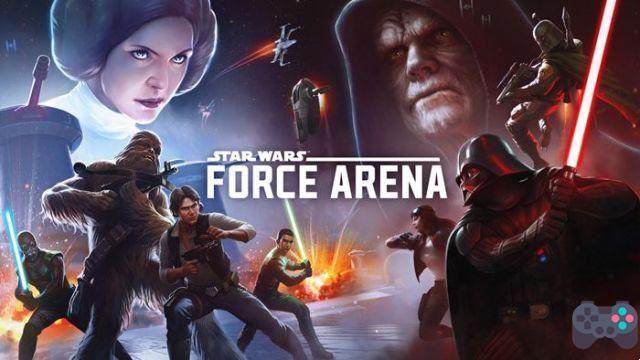 Star Wars Force Arena was released to Android e iOS. The game is free to download and the style is very reminiscent of Clash Royale, but with some modifications more aimed at the MOBA genre.

With an impressive visual, Netmarble is inspired by the formula of several games to deliver a gameplay that is not new, but at least escapes from some standards already tested in the Star Wars franchise, and that have proven not to work very well.

The game starts with the player controlling Luke Skywalker, but later gives the opportunity to test a team with the Empire as well. Everything seems confusing at first, but if I tell you that the game is a horizontal “Clash Royale”, things will start to make sense to you.

I joke that it looks like Clash Royale due to all the mechanics for collecting characters. Basically, the player competes with other players to win matches and collect card packs. These cards are where the characters are.

But Star Wars Force Arena is also a MOBA. Because, unlike Clash Royale, you control the main character of each team, called "Leader".

Minions are released by the player themselves and they cost mana, indicated at the bottom of the screen. There is not just one type of minion. In reality, the game is quite comprehensive, and it is possible to summon several strong characters that will give extra help in battles.

Star Wars Force Arena's graphics are very beautiful and the soundtrack doesn't even need to be mentioned, as it's all based on the Star Wars universe. The game is online only and is all in Spanish. The gameplay is simple and the focus on competitive makes the game a little more interesting than other Star Wars titles that have failed to capture their audience.

Star Wars: Galaxy of Heroes is available for Android and iOS ❯