Star Robots is a TPS with robots and great graphics (Android) 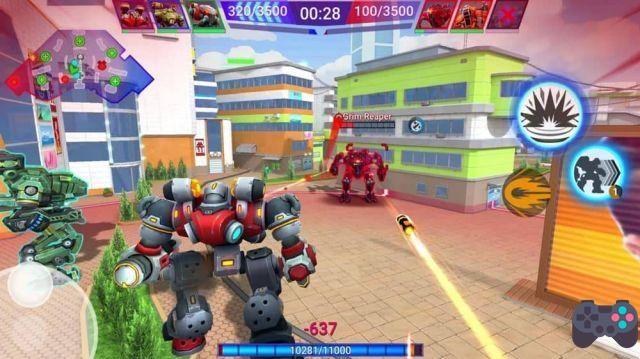 Star Robots is a multiplayer battle game where you control a robot. with gameplay TPS and very nice graphics, this game is with early release in Spain. fans of Android can download the game and play right now.

With quick matches and a focus on shooting and action, Star Robots has 24 different robots, each with unique abilities. This game reminds me a bit of hero shoots.

Fight with friends in multiplayer team battles in unique and exciting combat arenas. Discover and upgrade new robots and weapons with powerful and unique abilities that you can use to tactically control enemy zones in a giant transformer world. By analyzing your war machines, feel their synergy better and show everyone on the team how it's done! Join clans and teams to become experts in the arena!
To win! Capture! Evolve! Become the ultimate steel commander and show your tactical superiority in the giant Star Robots universe!

BECOME A STAR COMMANDER
Prove that you are the ultimate commander by increasing your rank and unlocking awesome rewards in this giant multiplayer transformers world!

UNLOCK AND UPGRADE STEEL WAR MACHINES
Unlock combat robots with incredible superpowers and upgrade them with points earned by fighting in the arenas.

FIGHT IN SINGLE GAME MODE
* “Domination” team battle mode! Defeat your enemies and control the bonus zones discovered on the battlefield. Show tactical prowess and hit your enemies with an arsenal of weapons. Use the power of your machines to turn the tide of battle in your favor, Commander!
* New modes will appear in future updates!

Resources:
– Real-time 3v3 tactical battles with players from all over the world.
– Transformers third-person shooter optimized specifically for mobile platforms, a fast-paced battle for survival in a multiplayer world.
– New rewards and events every day.
– Team and solo battles.
– Local and global rankings.
– 24 unique giant war machines to unlock, upgrade and engage in combat.
– Each robot has a unique attack technique and ultimate skill.