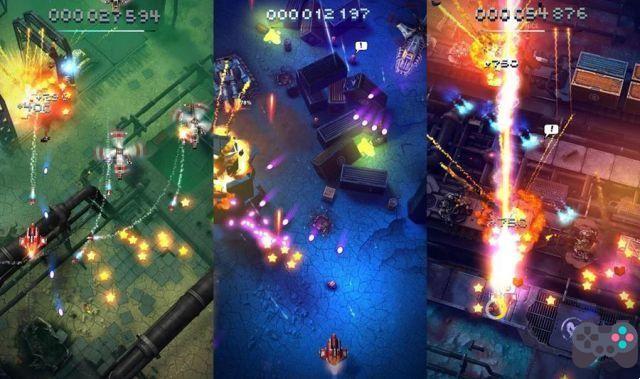 Sky Force Reloaded it's a spaceship game free of charge to Android e iOS. sequence of SkyForce 2014 (Android e iOS), in Reloaded we embark on another adventure alongside this clumsy pilot who is always helped by his repair team. Sky Force Reloaded has the same look and gameplay as the previous game, only adding new levels.

How is the game?

In Sky Force Reloaded, the player must guide his ship with his finger, the firing of weapons is automatic. There are several objectives to accomplish, such as destroying enemies, rescuing other pilots and upgrading your ship. Citing this last objective, it's clear that Sky Force is an endless runner disguised as a spaceship game.

From the start, your ship is very weak and you don't survive more than a few seconds. But it's enough to collect stars that serve to upgrade your ship in search of better attack and defense. The difference compared to endless running games is that after a certain moment, you no longer need to start the game from the beginning, as it is divided into phases.

The look is stunning, as it always has been since the Java and Symbian mobile version released over 12 years ago. But the plot is a little disappointing. A game with such a graphic could have a science fiction feel like Space Impact (N-Gage), or even bet on crazy things like Bug Princess (Android and iOS), but Sky Force Reloaded falls back on the “no salt” plot. ”.

. You will notice that the version for regular cell phones is very similar to the one that came out recently, but with a much more modest look.

Sky Force Reloaded is one of the best spaceship games released in 2016 for Android and iOS. However, the Android version came poorly optimized and may present lags on devices with little processing power such as devices with only 1GB of RAM and a 1.3 GHZ processor.