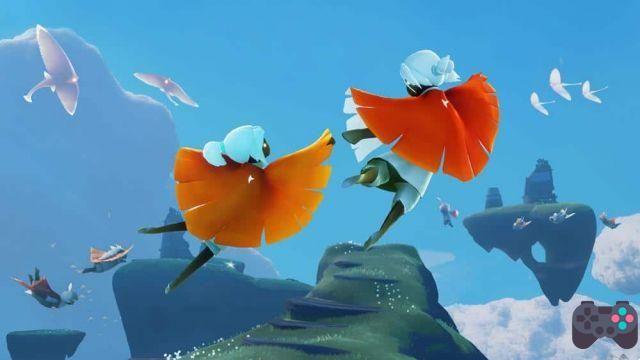 The game for Android and iOS, Sky – Filhos da Luz (Children of Light) has a special event. “Rainbow Days” arrives along with the new update and an important message. 100% of the profits from the “cure package” will be donated to the institution “Médicos Sem Fronteiras” to help in the fight against the new Coronavirus pandemic.

The new event allows players to find a rainbow in the middle of the kingdom daily. Players will then be able to answer that age-old question: "what's at the end of the rainbow". Whoever manages to get there will find an extra treasure. The update includes new missions, bug fixes and performance improvements.

The event will run until June 14th. Starting on the 15th, a new event with double reward will start. Help other players to finish the game and earn even more rewards.

As part of participating in the #PlayApartTogether campaign, That Game Company announced that they are partnering with Doctors Without Borders to support relief efforts to combat COVID-19. Starting at 12:7 PDT (UTC-18) on May 19,99, they will be offering the Healing Pack for $XNUMX.

This pack comes with 75 regular candles as well as a flower accessory to show your support. 100% of the proceeds (net receipts) from this purchase will benefit efforts in the global fight against the pandemic. This pack will be available until 12pm PDT (UTC-7) June 22nd.

Sky – Filhos da Luz is a free and online game for Android and iOS that only has cosmetic purchases.

Keep in mind that the sixth and final quest to collect the colored light to rebuild the Forgotten Ark will be available on June 11th. In previous seasons, the season finale scene was tied to the conclusion of the seasonal constellation. This season, the final Enchantment cutscene will become available once all six colored light quests have been completed. Quests to restore the Forgotten Ark will be available to complete after the season ends, which includes this final scene. Please note that the last day of the season is June 21st.

Celebrate rainbows in the sky world! Starting at 00:00 PDT (UTC-7), June 10, rainbows will appear in Home and the Daily Realm, as well as in a daily quest to look for them. Enjoy an extra cluster of treasure candles (large red) located at the end of the rainbow. On June 11, make sure you complete the Forgotten Ark restoration and claim four free rainbow scrolls. We hope you will share screenshots of you and your friends with the rainbow on social media! This event ends at 23:59 PDT (UTC-7) June 14th.

Starting at 00:00 PDT (UTC-7) on June 15th, take advantage of twice as many seasonal light nodes in the daily domain to create an extra seasonal each day. Can you find all eight? This event ends at 23:59 PDT (UTC-7) June 21.

Order the next season

After the Season of Enchantment is complete, the next season's pre-order will be available. Keep an eye on our social channels for announcements and previews!

In an attempt to combat malicious grief with the chat table support, we've disabled collision until friends and strangers choose to sit at the table. This is aimed at preventing people from blocking the way through portals, tunnels and doors, as well as using meditation circles. It is important to note that if the table is moved (eg for out-of-bounds stacking purposes, etc.), other players will not need to sit at the table each time they are moved to reactivate the collision. You only need to sit at someone else's desk once and the functionality will return to normal. Note that if you leave the area (such as hitting the loading screen to move to a new area), you will need to sit down once more to reactivate the collision. No changes have been made to how you interact with your own table.

Bug fixes, improvements and other changes

Fixed issue affecting screenshots on iOS and Android
Fixed an issue that caused players to be thrown out of bounds when skipping the scene in the Hidden Forest temple
Fixed touch input issues affecting dpad, shout, stepping and camera control
Fixed floating candles on the Forgotten Ark
Icon spelling improvements for visual clarity
Fixed three candles in the Hidden Forest not granting light
Fixed the issue where the unavailable button color was not grayed out properly
Fixed issue that affected running animations and step mode on the left side of the screen in two-handed mode
Fixed animation issue when a player takes out their sail or catches a crab in certain positions
Cloud rendering optimizations
Fixed an issue where only the cancel button appeared in the confirmation menu when unlocking items from Spirit's friendship trees
Fixed issue where message candles would not display correctly for other players