Skeletal Avenger is a Roguelite that was released to iOS at the end of 2021 and that arrived last week on Android (sorry). Paid and “offline”, the game invites the player to venture into catacombs full of skeletons, where you must revive them and use them in combat. 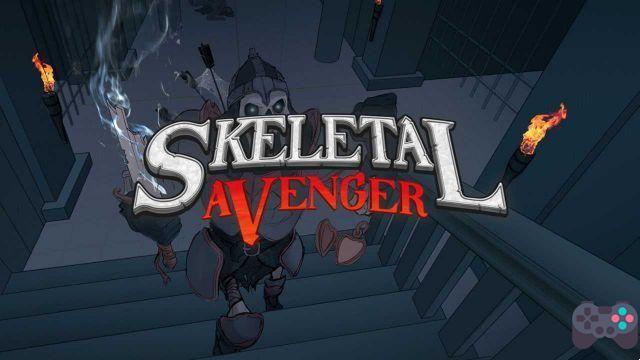 Unlike other games where you are a handsome and muscular hero, in Skeletal Avenger your character died many years ago. He simply rises from a tomb and sets out to take revenge on whoever murdered you.

As it is a Roguelite and not a Roguelike, Skeletal Avenger has less punitive and more streamlined mechanics and gameplay. This makes the game very addictive. He died? Just start over with the weapons you take to the grave.

Despite the isometric camera reminiscent of Diablo, the combat in this game is very similar to Hades (PC and consoles). You can use two combo attacks and a dash to dodge enemy blows. The gameplay and frantic action are even better with the controls very well adapted to touch screens.

Skeletal Avenger has several resources, when exploring the procedurally generated maps, we can find 4 different biomes, among them: Dungeons, Sewers, Dark Caverns and the Sorcerer's Castle.

The game also has a cooperative mode for 2 or 4 players.

Skeletal Avenger is available for Android and iOS. On Google Play the game costs BRL 37,99 and on the App Store it sells for BRL 34,90.

Skeletal Avenger is a roguelite action role-playing game with a vast arsenal of talents and special moves! Revive skeletons and fight your way to revenge. Create new playstyles with each match using the perks. Loot, explore, take revenge and do crazy things with talent combos.

Features:
– Discover and experiment with dozens of talents to pull off devastating combos
– Find new gear to switch between skull-cracking attacks
– Loot weapons, armor, boots and other objects to get stronger
– Explore and master a fantasy world with four unique biomes
– Infinite amount of procedurally generated dungeons to explore
– Several unique enemies to eliminate
– Use gold to permanently improve your skills

Skullgirls: one of the best fighting games comes to Android and iPhone ❯