O novo Battle Royale mobile, SIX.A: Raiders Mission, won closed beta test this Tuesday (07). Unfortunately, it's only officially available for Indonesia, but it can be accessed by devices from other regions via an APK. 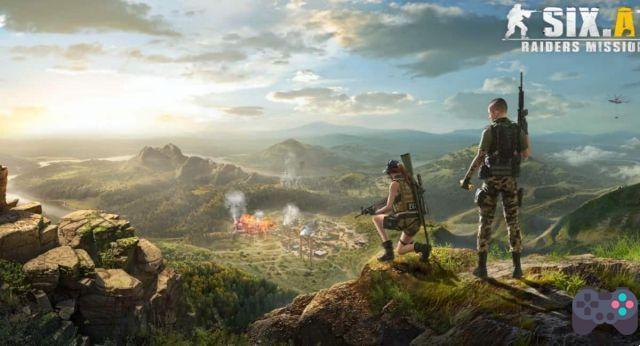 SIX.A: Raiders Mission is a third-person Battle Royale for Android and IOS, very similar graphically and technically to PUBG Mobile and Free Fire, published by TeamLOM and developed using the Unreal Engine 4.

The game has some differences from the usual Battle Royale, such as: when entering the map, players guide a kind of hang glider instead of the famous plane or battle bus, in the lobby you can ride horses — indicating that the mount may be in the matches —, SIX.A: Raiders Mission also features PvE during matches, where players face off against titans, which are like bosses scattered across the island.

In addition to these differentials, the player also faces zombies and other challenges that will make it difficult to reach the final objectives that are: being the last survivor, collecting diamonds and escaping in a helicopter.

There are also climate cycles with a day and night system, which alternate with the passage of time within the matches. Biomes will be present in the game, including islands, deserts and forests.

In the closed beta, players will be able to play with three different characters, Eva, Raphael and Li Guawu, until September 20th, when the beta ends. After the trial is over, all player data will be permanently deleted.

If you are in Indonesia, the game's page on Google Play can be accessed. You can find the beta on websites that provide the APK.

SIX.A: Raiders Mission weighs 1 GB and an internet connection is required during gameplay. There is still no information about global release, release date or requirements to play.