The Game Awards is one of the biggest events in the gaming world, known as the “Oscars of Games”. Through its Twitter account, the organization of the event has just revealed its nominees for best mobile game of 2021. 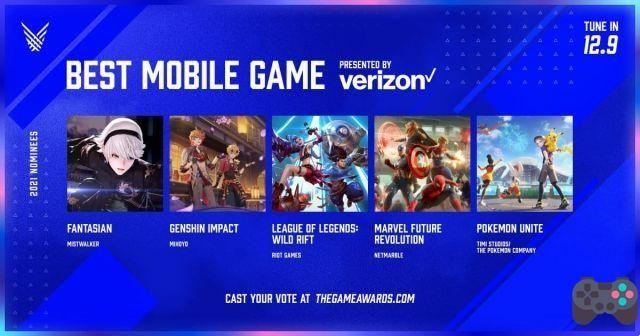 Players will be able to vote for their favorite game via the website TheGameAwards.com.

Despite being nominated also in 2020, Genshin Impact appears again in the list of best mobile games. The game is an open world RPG with a focus on its narrative and absolutely zero “automatic buttons”.

League of Legends: Wild Rift was finally released on mobile in March of this year. This one needs no introduction. The more than perfect conversion from a MOBA to the touch of mobile phones.

MARVEL Future Revolution is an RPG by Netmarble that surprised everyone with impressive graphics. The gameplay despite having "automatic" elements still requires the player to be in charge at various times.

Surprisingly, The Pokémon Company and Tencent announce and release a Pokémon MOBA. What seemed like an uninspired game turned out to be one of the best games of the year 2021.

The event takes place on the 9th of December at 22 pm and it will be revealed not only the best mobile game of 2021, but also from other categories.


Spanish in the area

Spain will participate in The Game Awards 2021. Spaniard Alexandre “GAULES” Borba Chiqueta is in the running for the “Content Creator of the Year” trophy. It's possible vote in this category too, vote no Gaul!