Scary Teacher 3D is that typical “meme game” that is successful to this day. Launched on Android in 2017, the game started to become very popular in 2021, due to videos on Youtube.

In Scary Teacher 3D, you have to escape from an “ugly and grumpy teacher who has been scaring the kids in your neighborhood. The game mixes stealth and suspense with touches of humor, as the main objective is to make various pranks with this teacher.

The game dynamics are very similar to Hello Neighbor and Ice Scream 3 . But instead of running away, you'll play pranks on the teacher. How about putting a mousetrap for her to catch?

The game's commands are simple. In the left right part of the screen is a button to move the character. On the right are the buttons for picking up objects, opening doors, jumping and ducking to hide from the teacher.

The game is divided into phases, where in each of them there is a prank for you to do. As the game is only available in English, many people don't know how to pass some levels, and maybe, because of that, the game has gained notoriety on Youtube.

Scary Teacher 3D is short. There are only 15 stages with fun challenges to complete. Of course, the challenge increases with each phase, and the ugly teacher gets smarter. At times she will notice the pranks and discover that someone has been messing with things in her house. 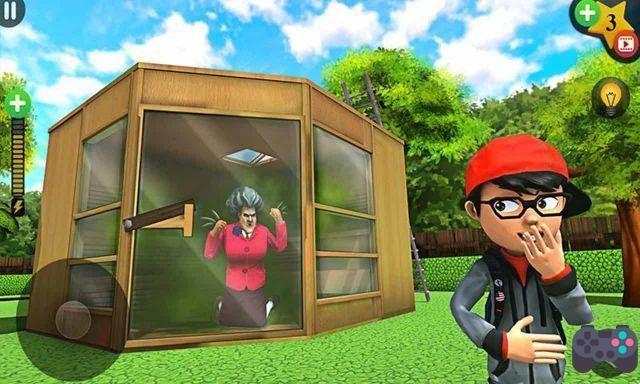 When the going gets tough, players can turn to aids like power-ups. Among them is an energy drink to walk faster, a hammer to break things, a trap and a crowbar to open cabinets and discover secret items.

For a children's themed game, it's a shame Scary Teacher 3D isn't in Spanish. The game is only available in English. But if it's any consolation, it's completely free and offline.