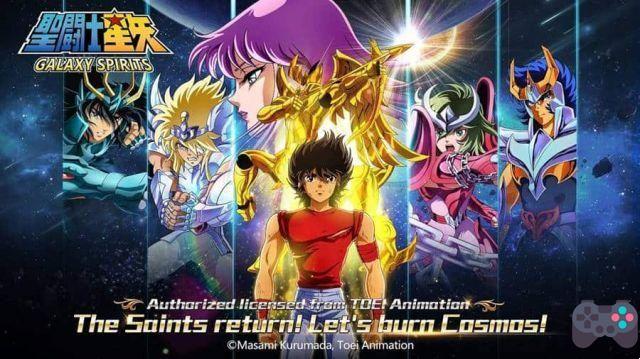 Saint Seiya: Galaxy Spirits is a new game for Android and iOS that brings together the characters from the anime “The Knights of the Zodiac” (Saint Seiya in the original). The Japanese game developed by DeNa, has just won an English version.

Galaxy Spirits doesn't stray too far from the "Gacha Games" standard of other Japanese games. The game is an RPG with "assisted" battles and it is up to the player to only level up their characters and use special moves when necessary.

The game is focused on being light and small. Unlike Cosmo Fantasy, the graphics are in 2D, and the dialogue is more concise.

The only highlight of Saint Seiya Galaxy Spirits, which makes it really interesting for CDZ fans, is the possibility to play the “Abel” and “Asgard” sagas. All characters have the legendary trait of Shingo Araki and have very beautiful arts in their "cards".

Saint Seiya Galaxy Spirits was released in Japan back in 2016. The game is already long overdue for the west. Will he arrive soon?

New Apex Legends Mobile Beta is out, learn how to download and play! ❯