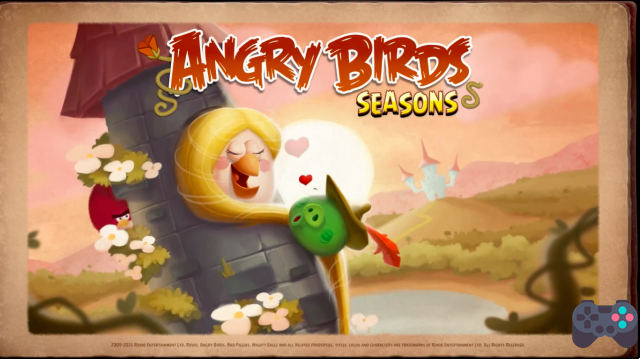 After so much success on all platforms and mobile operating systems on which it was released, the game Angry Birds currently has over 50 Million Downloads! a success! being that almost half of all this is its version for iOS (AppStore) because the iOS platforms (iPhone/iPod Touch/iPad) were the first to receive the game, but it is currently available for other platforms such as Android for example, but there is no difference in the game between platforms.

With the arrival of Halloween, the Rovio (game developer) certainly, to earn more money, had the idea of ​​making not a "modification" to the original game, but a separate version, entitled “Angry Birds Halloween” in which the game was Angry Birds, but with levels, items and objects in the style of monsters and witches, that is, Halloween style.
Currently, with the arrival of Christmas, in which it is the end of the year and sales increase much more, instead of making another single version with a Christmas theme, who already had the game “Angry Birds Halloween” got a free update in which it changed the theme from Witches, Pumpkins and Dark Skies to snow, lights, trees and more, which is entitled to highlight at Christmas, now called “Angry Birds Seasons” (Passaros Bravos Temporadas in free translation) that is, those who already had the game in the Halloween version was updated for Christmas and soon news is coming...
A Rovio confirmed that as many rumors persisted, YES! Em February 2011, Angry Birds Season will receive an update in which it will modify the theme for Valentine's Day or Valentine's Day for those who prefer!

Angry Birds version for FACEBOOK on the way?
Yes, Rovio it is said that “Facebook needs more important games” and said this in relation to the “Angry Birds”, this is no surprise as many want this, and it may not be long before we see “Angry Birds” No. Facebook.
If you don't have the game yet, choose which version you want and download it from Appstore*:
* = Only for iPhone/iPod Touch or iPad
Angry Birds “comum”:
for iPhone and iPod Touch: Full Game (US $ 0,99) | Demo/FREE/Lite/Demo Game for iPad (HD/iPad version): Full Game HD (US$ 4,99)
Angry Birds Seasons (tema Atual: Natal)
for iPhone and iPod Touch: Full Game (US $ 0,99) for iPad (HD/iPad version): Full Game HD (US$ 1,99)
The game in both its "editions" (normal and seasons) received news in the last update such as: The interesting thing is that the Christmas version game (season) will receive new levels by Christmas!
If you already have the “Seasons” edition, just wait and it will be updated when the Valentine's Day theme is available, if you don't have the game yet but would like to, the download link on the AppStore is up there, just check it out!
NB: The update will be for ALL platforms that have “Angry Birds Seasons” such as Android and iOS.
I believe there will be an Easter-themed version later…
by [ andre.ntx ]
News source: TouchAholics.com
Rovio is working on a new game, and it's NOT Angry Birds ❯