Review: Stranger Things The Game is as good as the series (Android and iOS) 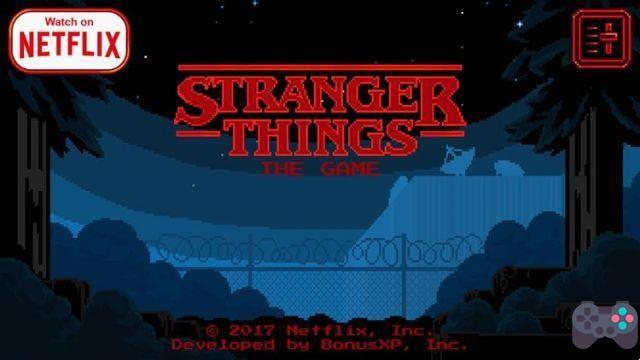 Mobile games from famous series and movies are mostly Adveergames. In other words, games whose function is to act as a banner to invite you to watch something. But that's not what happens with BonusXP's Stranger Things The Game.

Yes, Stranger Things (the game) is a free title, but its quality is premium. The game doesn't have ads or in-app purchases, it doesn't have silly and repetitive gameplay and, oddly enough, it manages to have that nostalgic style from the 16-bit era (Super Nintendo and Mega Drive).

No, it's not just the look, the gameplay looks like an old game, with story and objectives to keep the player entertained for a long time.

While the Stranger Things The Game icon looks like an 8-bit Nintendo cartridge, the game's graphics are clearly inspired by the Super Nintendo (SNES) and Mega Drive games.

The audio is also inspired by classic games, with music and sounds that refer to the 90s. This type of world construction that is different from the series' proposal (which is set before the SNES and Genesis exist). The idea seems to have been to set the game up so it wouldn't be too retro, as the average audience today has never touched an 8-bit Nintendo or Master System. It makes sense.

– How is the gameplay?

Stranger Things The Game is an action game with puzzle elements. Reminds me a lot of games like The Legend of Zelda and Goof Troop. The camera has an aerial view and the feeling is of playing an authentic Super Nintendo game. There are many references to The Legend of Zelda: A Link to the Past. They are present whether it's time to open a chest or buy items.

The similarities with Goof Troop exist in the way each character is conceived. In the beginning, we played with the policeman Hopper. He's strong, but he's slow and doesn't throw objects from a distance like Lucas. Mike, on the other hand, can use a bike to get around the scene quickly and also a flashlight that can dazzle enemies. Each new boy or girl has abilities that allow them to access new areas of the map.

Speaking of which, the map is the highlight of the game. Very well done, it hides several secrets that encourage the player to revisit areas to find new items.

The adventure is punctuated by enemies to beat down (or just dodge) and puzzles to solve. The construction of the puzzles is particularly interesting, as the game leaves the formula of “leading the player by the hand” and presents a challenge that deserves to be solved.

The main objective is to find all the children. But there are also side quests like finding all the garden gnomes, cassette tapes and waffes (just things kids don't know about anymore). The game has two modes: Normal and Classic. The difference between them is in the saves. Classic mode doesn't save the game as often.

The game's controls are adapted for the touch screen. Instead of having an analog stick and on-screen buttons, characters respond to touch commands. Tap to walk and tap enemies to hit them.

Stranger Things The Game would be a perfect game if it weren't for the controls. There are times when the gameplay requires a certain agility in the controls and everything is difficult to do if you have big hands and a screen of 5 inches or less.


It's not something that completely ruins the game, but at times when there are a lot of enemies, it's common to tap to walk instead of tap to attack enemies and confusion is set.

On the emulator on the PC or on a 5.5 inch screen, the game works very well. But those who have big fingers (like mine) will missclick a lot in the game.

This would be perfectly understandable in any other puzzle game. But as Stranger Things The Game has this "retro" feel, I don't understand why the developers didn't implement virtual buttons on the screen. It would be something simple to do. All in all, it was a bad design choice.

With about 4 hours of duration, Stranger Things The Game is a very satisfying experience, considering it's a free game. It's the game to close in a single session, but one that reminds us of how mobile games should be. It could cost $4,99 which would be worth every penny.

add a comment of Review: Stranger Things The Game is as good as the series (Android and iOS)