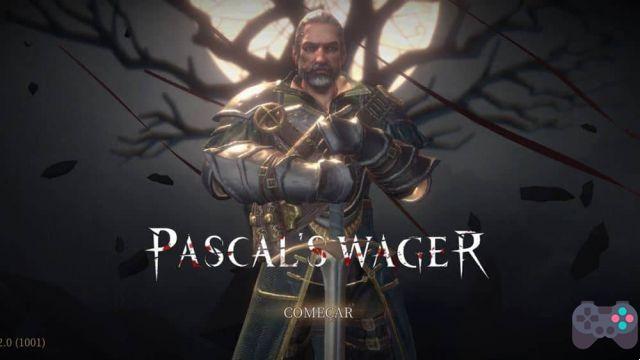 Created by Chinese studio TipWorks and published by Giant Games, Pascal's Wager is an attempt – very successful – to bring a game similar to Dark Souls to smartphones. The game was recently released on Android and we took a look at this “Pascal's Bet”.

Is it good? Worth to buy? Check out the full review!

– The Story of Pascal's Wager

Our doubts about Pascal's Wager already start with the name of the game. Translated into Spanish, we would have the strange title “Pascal's Bet”. This bet refers to a theory of mathematician, philosopher, theologian, inventor and physicist (phew) Blaise Pascal, who lived in the 1660th century. A convinced atheist, one fine day, around XNUMX, Pascal decided to create a theory that it is better to believe in God than not.

But the question of whether or not the entity God exists is something that seems to have already been passed over in the plot of Pascal's Wager.

In the game, the world is shrouded in darkness, the sunlight is gone forever and human beings live in a "Long Night". But it's not just the darkness that's the only problem. A strange mist called Sendril has the power to drive people mad and turn them into monsters. The only thing that can chase away the fog would be sunlight.

Then appears the only thread of hope for humanity, the colossi. These beings look like giant trees with a head in the shape of a “little sun”.

But while they are a hope, the colossi are also a curse. They started moving towards the “Tomb of the Colossi”. What does that mean?

In the meantime, we control Terrence. A former messenger who was kicked out of the church. Terrence wanders through the mist looking for his wife, Teresa. She was convicted of being a witch and would be involved with the walking of the colossi.

Terrence shares his journey with Viola, another exile from the Church who will help him in his search for Teresa. During the game, Terrence is saved by the enigmatic Norwood. We also came across Benita, a friend of Terrence and his wife. Benita saved Teresa in the past, donating her eyes to prevent her from being murdered by the church. All these characters are player controllable.

– Welcome and prepare to die

When opening Pascal's Wager, the game warns the player that he will face a “differentiated” experience. For those who are used to mobile games, the Giant Games title is a reality check.

Pascal's Wager is brutally difficult! However, the game's learning curve is relatively honest (except towards the end).

Fans of mobile games who don't know "Souls Like" games will also find it strange that the character "tired" after applying a few blows. As in games of this "genre", the character has a bar of stamina / energy that is drained when performing blows.

Here comes the biggest and best feature of Pascal's Wager: the combat. 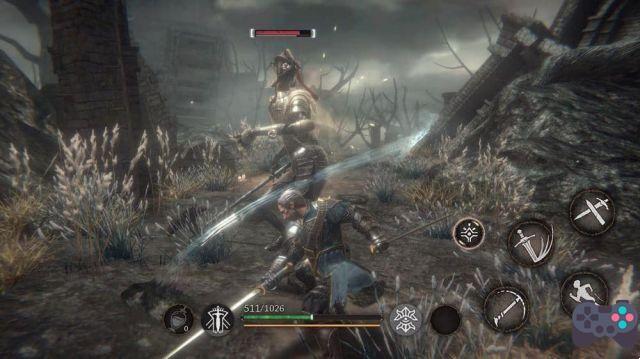 TipWorks' game is very well inspired by Dark Souls-style games. It provides cadenced combat that demands precision and resilience from the player.

A lot of people look at the screenshots and think that Pascal's Wager is a hack'n slash to “smash the button”. Whoever bought the game thinking about it, will be in for a very unpleasant surprise.


But anyone who bought it thinking it would be a copy of Dark Souls in every way will be disappointed too.

We start the game with Terrence, who uses a big sword and a sharp cane, used as a fencing sword. Its attacks require skill and precision from the player, because when attacking it is good to perform a combo and then dodge, due to the consumption of stamina, fury and sanity.

Yea! Here begin the differences between Pascal's Wager and Dark Souls. If there are many similarities when it comes to the “singing sword”, that is, in combat, throughout everything else, the game is quite different.

Your character is consumed by the Sendril mist as he fights monstrous beings. So you need to use sanity potions to prevent your character from becoming “Freak” or “Lunatic”. Upon reaching the “Abnormal” state, enemies become more difficult and your character loses part of his health. When your character becomes “Lunatic”, apparitions of other enemies begin to appear on the map.

The game becomes a kind of challenge “to the taste of the customer”. But be aware, when reaching the "Lunatic" state without being on a boss, it is almost impossible to advance in the game. The only two options are to die or find an Altar to save the game.

Another element that is quite different from Dark Souls is the ability to switch between characters. You can choose between two characters of 4 selectable to face each stage.


Each character has advantages and disadvantages. Terrence is great for melee sword combat, with good dodging but weak defense. Norwood fights very well in the fight, but has a bad dodge, his differential is using a coffin as a shield. Viola is great for ranged combat, but has fast attacks at close range as well. Benita is a character that takes time to learn to control as she mixes mid-range attacks with the use of energy consuming prayers.

As you can see, only with Terrence we have that impression of a 100% “Dark Souldian” combat. With the other characters, the studio demonstrates versatility and creativity when it comes to creating different combat mechanics. The very fact of switching between characters makes the game a little different from a “clone that Dark Souls”, which is very good.

The settings are another point where the game differs from Dark Souls. Instead of interconnected scenarios, the game is divided into phases. But these stages aren't just for walking and fighting enemies. There are many secret passages, sidequests and secrets to discover. The game really encourages you to do a lot of “back tracking” to try to find all the secrets.

Pascal's Wager has a look that divides opinion. There are those who find the graphics beautiful and there are those who find it a little blurry or too hazy. For the purpose of the game, my opinion is that the visuals are good. It is a mobile game, made by a small studio and that hoped to operate at a reasonable level of compatibility on Android.

Compatibility with mid-range cell phones didn't work out very well. Despite the character modeling not being absurdly detailed, the game requires at least a Snapdragon 835 or higher.

The scenarios are beautiful, but a little repetitive. Which makes sense, since in the storyline, the entire planet was ravaged by the lack of sunlight. So it's normal to have a more or less uniform look between villages, castles and churches.

As for the audio, the game rocks! The soundtrack is striking with slow music that gives the game its eerie tone. From the great opening song to the closing track, it's worth playing with headphones maxed out!

– …But the ending is very Dark Souls

Pascal's Wager has two difficulty modes: Casual and Normal. In casual mode it is possible to play without worrying too much about the level of your Altar (and characters). However, the last scenario (Blessed Lands) and the last boss of the game will take their toll.

It gets very difficult and each enemy practically becomes a mini-boss to be defeated. The priests in this scenario, the Pope-like ones, are almost impossible to defeat without taking a health potion or two from you. Facing two or three of them at once is suicide.

The solution then is to “farm” your build. Evolve characters at the altar, unlock talents, abilities, etc. Otherwise, prepare to die hundreds of times before you see the game's closing screen.

The difficulty scale changes abruptly towards the end and the game becomes a true “Dark Souls level quarry”. The game will offer an almost impossible challenge, and worse, after saving this part, it is not possible to go back to try to “upgrade” the character, you will be stuck in the last boss and you will have to face him the way Terrence is.

The game is even more difficult when playing with touch commands. Fortunately, control support in Pascal's Wager is full. It is possible to play with Ipega's Bluetooth controllers and even video game controllers. When connecting, the game already shows the commands with the buttons on the controller.

By bringing that almost sadistic feeling of dying infinite times in a boss, Pascal's Wager demonstrates that it is possible to make a “Souls Like” for mobile. The TipsWorks title escapes the cliché of trying to copy as much as possible and puts its own spice. This might put off some who wanted an identical copy, but copying too much leaves any game literally "soulless".

Pascal's Wager is an ARPG worth every penny. Good story, precise controls and a difficulty that is never unfair. A memorable game that was missing especially on Android.

A game key was provided by the publisher.

Review: Stranger Things The Game is as good as the series (Android and iOS) ❯