Review: Oxenfree is one of the best mobile adventure games of 2017 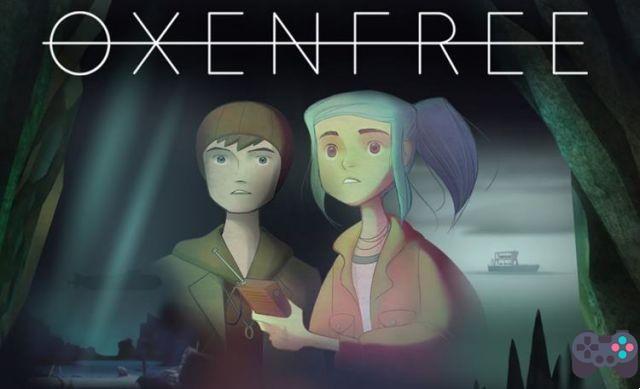 If you've been through adolescence, the most nostalgic memory of that time will surely be friendships. Oxenfree is an adventure game that deals with the theme, while addressing death, divorce, ghosts, time loops and, above all, choices. This game launched in 2016 arrived on Android and iOS in July of this year. We took it for a quick look and were blown away by its exceptional narrative construction, coupled with an amazing replay mechanic that creates (and also solves) many of the game's mysteries. Ready for another review?

Before continuing, I want to warn you that this is a spoiler analysis, as it is necessary to explain a lot about the story, because in any adventure, the narrative is the link that connects everything. So I don't want to stay here trying not to "walk on eggshells".

Oxenfree is one of the first games from Night School Studio, a production company created by former Telltale employees. The ideas brought by this team of outsiders are very good. The dialogues are fluid and fast. The characters don't wait for you to answer and the options aren't as “obvious” as in Telltale games.

One of the main differences of the game is precisely its ending. As the story unfolds, it is possible to save or not save a character and form couples. More than that, as you will see below, there are multiple endings. The choices for these endings aren't that obvious (for first-timers), and that's pretty awesome.

– What is Oxenfree (characters and story)

Oxenfree is an adventure game that follows the point and click genre. A group of teenagers embark on a trip to an island in search of doing what teenagers do best, which is… partying. They go for a night of relaxation because as they are growing up, they will study in schools and go to college in other cities. Anyway, soon the group will break up and this could be their last meeting. 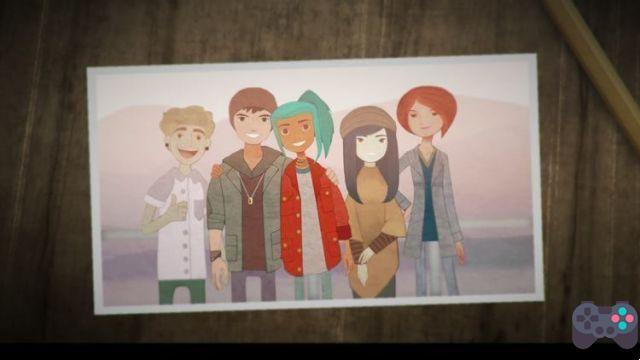 From left to right: Ren, Jonas, Alex, Nona and Clarissa.

In this group are: Alex (the protagonist), Jonas, Ren, Nona and Clarissa. Jonas is Alex's stepbrother. Her father and his mother came to live together after Alex's brother died in a drowning she witnessed. In the group is also Clarissa, Michael's ex-girlfriend. She blames Alex for not doing anything to save Michael.

Nona and Ren are the most “loose” characters in the story. However, they have a use. Through the dialogues, it is possible to make the two stay together in the end. This is the first insight that gives the player the ability to change things in Oxenfree, and that's just the beginning.

These boys leave for the island of Edwards Island already knowing that the place was a military base. What they don't know is that there was a terrible accident at the scene. The sinking of the submarine USS Kanaloa, sunk by friendly fire in 1943.

97 people died in this shipwreck. But they didn't exactly die. The submarine's crew have been trapped in an existence between life and death and now intend to possess human bodies in an attempt to get off the island.

Alex discovers that, with a radio, he can contact these "spirits" and cause time portals to open. However, she is trapped the night the friends go to the island, and is destined to relive the same events over and over again.


None of this is from the game's synopsis. You have to find out what happened and when it happens it's pretty cool. However, these are not all of Oxenfree's secrets.

Oxenfree is a game of choices, and the consequences of those choices are at the heart of what unites Oxenfree's gameplay with its story. In addition to being able to join, or ship, if you prefer, Ren and Nona, you can make Alex and Jonas stay together in the end [SPOILER] Michael and Clarissa.

The game's dialogues and the way they are written are sensational. Nothing is as “in your face” as in Telltale games. The answers we give are vague and, at times, funny. The jokes are good and so are the tense moments. All in perfect harmony as one, or one, teenager would respond. Rich dialogues that are far from the silly clichés we see around.

Alex is a laid-back young woman, while Ren is the “nerdy” type. Jonas is typical hipster from the city who smokes and etc. Nona doesn't have a lot of expression, but she's also not a character that connects with a stereotype. Clarissa is evidently an attractive girl, but at the same time she is very resentful of what happened to Michael. Each character expresses their characteristics without sounding too “clichéd”.

Oxenfree's commands are simple. Just tap to the location where you want your character to walk. Tap an object or person to interact with it. The game gives the player the freedom to explore, and learn where to go and where to back off, and that applies to dialogue as well.


This game doesn't make it clear that the character is in a time loop, it's only after an incident where she realizes she went back a few seconds in time that we have any idea what we're dealing with. To complete, at the end of the game appears the phrase "Continue Timeline?". And the game starts again with Alex wondering, on the way to the island: "Wait, we're back to the island".

That's how the game holds the player. Through a curious mechanic of repetition. Alex is stuck in a time loop, reliving the same night over and over again. It's up to the player to choose which ending they like best and "end" the loop. A curious point of this mechanic is that it is possible to make the Alex from the previous game interact with the new Alex, leaving messages on mirrors and on the radio. To close the Loop, the player needs to send the message to Alex not to go to the Island, and at the end of the game her friends decide to do something else.

I played the game a lot on an Android phone (Lenovo Zuk Z2). Unfortunately Oxenfree requires a robust device with at least 4GB of RAM. On iOS the requirements are lower. But despite being compatible with older iDevices, Oxenfree has some bugs on iPhone 5s and 6, it works better on newer Apple devices.

Oxenfree is a sensational game. It's a fun and scary experience (just a little bit). The big hook is the mystery and how to get the “perfect” ending. On mobile, the characters may be a little small. But that problem is offset by the brilliant soundtrack. Unfortunately, it's an English-only game and you need to have a good command of the language because the dialogues are not obvious and are very fast.

add a comment of Review: Oxenfree is one of the best mobile adventure games of 2017