The Need for Speed ​​Shift Series is a middle ground for those looking for something between realism and fun, offering a style of play that is somewhere between Asphalt and Real Racing. The new game in the franchise, Shift 2 Unleashed, despite the surname, "released", just brought more of the same in a controversial version, of the type "love it or hate it".

For those who follow the NFS franchise, you know that Hot Pursuit is a very good game, an excellent arcade racing game that refers directly to the old NFS for Playstation. However, the Shift subseries is a little more realistic. The impact generated by the first Shift was very good and for the second, I in particular expected a game with a look similar to Real Racing 2, but less challenging.

Another annoying thing EA invented was the “NFS Store”, a store where you buy parts and cars with real money. In addition to the problem of spending our “rich money” the NFS Store asks for connection every two races and this is really annoying. As if that weren't enough, we still have the ads from Origin, EA's new social gaming network. Why not use Game Center?

The soundtrack isn't great either, not that it's horrible, but I'm wondering where are those cool songs we used to hear in EA games for Playstation 2. NFS Underground and Burnout have excellent soundtracks. As if that were not enough, “who is playing” does not appear as in these Playstation 2 games. 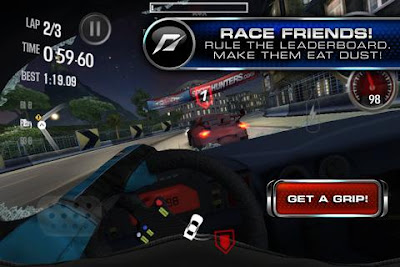 Only night and with cockpit view, the game seems to have good graphics

The graphics presented in “Shift 2 Unleashed” don't bring a big improvement over the previous game. In the eyes of any player, the game will appear to be the same as the previous version. As the tracks are usually very similar in Shift 2, at times the game seems even uglier than the first game.

The game's difficulty isn't great, but it's relatively more difficult than other iOS racing games (with the exception of Real Racing). One of the precautions you will have to take will be not to over-equip your car, as some settings make cars “undrivable”.

Shift 2 came from a big hit from the App Store. While its predecessor was always the first game anyone ran to showcase the powers of iOS back in 2009, this new version is almost the “shame of the family”. The game looks graphically mediocre on the iPhone 4 and iPod Touch 4G. Its gameplay is very boring in the beginning and the final part of the game doesn't make up for the initial discontent.