After two months of exhaustively testing the control Game Sir X3, we can draw a conclusion about the same.

Control is expensive! Without a doubt! Getting to have a price similar to the excellent Xbox controller. But the amount of features and a “secret function” justify and make this gamepad one of the most sought after.

In this review, you will find out what these features are and what this “secret function” is that most youtubers have not talked about, including Adrenaline.

It is worth remembering that GameSir X3 is an exclusive controller for Android smartphones, as it needs to be connected via the USB Type-C port.

The GameSir X3 comes at a time when handheld consoles are all the rage.

The Sony PSP/Nintendo Switch format, which GameSir introduced in the X2, has gone down very well with smartphones.

This design is perfect for gaming, whether sitting, standing, or even lying down (which, by the way, is the best option).

With features such as: cooling fan, screen mapper, option to change front buttons, analog rubbers and even d-pad; the GameSir X3 proves to be very versatile. A serious contender for a definitive controller for the mobile gamer.

Here's what comes with the controller:

I won't lie, the GameSir X3 is a great controller. And if you have a big smartphone, then you're going to be left with a tumble on your hands.

But this is great for people who have big hands, or who are looking for a less portable but complete experience.

The controller is less “flattened” than the X2, and part of this is due to the huge cooler that comes with the X3.

But in addition to this cooler, there are also some curves that improve the grip.

When receiving the control, the first thing to do is put the rubbers on the analogs.

GameSir X3 comes with a kit with various rubber sizes. Including one that is the same size as the Xbox Series.

GameSir X3 does not have Bluetooth mode. The controller is connected to the smartphone via the USB Type-C port only.


The controller supports smartphones with screens from 5.5 to 7 inches.

To connect the smartphone, you must attach it to the controller as described in the image below.

Sometimes, when docking the smartphone, it will not connect at first, you have to wait a few seconds. The blue LED flashes a few times until it is fully lit. Only when it is lit, without blinking, is the control properly connected.

The controller has two USB Type-C ports. The central one is for powering the cooler and there is a side port for charging the smartphone while gaming.

Yes, that's right! To make the cooler work, you need to connect it to a power bank or charger of at least 2A (amps). Otherwise, it doesn't work.

The controller doesn't have any kind of battery and doesn't pass energy to power the cooler, you'll have to carry a charger or power bank around if you want to use the cooler.

This is a problem for anyone who intends to use the controller away from home, and it also kind of breaks the concept of mobility. 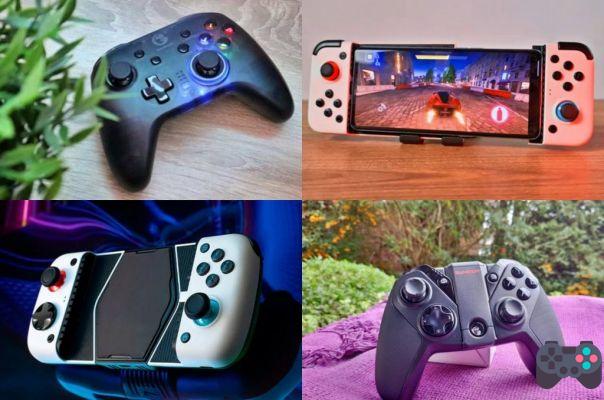 How the control is recognized by Android

GameSir X3 is recognized by Android as any controller that is connected via OTG to the USB Type-C port. It is recognized as a standard HID control.


Just with this standard function, you can play all games that support gamepads, emulators and cloud gaming services like Geforce Now and xCloud. You don't need to configure anything.

However, this is where the “little secrets” of the GameSir X3 begin and where control is justified.

In addition to this standard mode, with blue LED, the controller has a special one called “GameSir mode”.

To activate GameSir mode, press G and “home” (drawing of a house) until the controller lights up the green LED.

This mode can also be activated by opening the GameSir application. It will recognize the control asking to activate the mode.

And what does this GameSir mode do?

Well, this mode allows you to use a screen mapper. This makes the controller compatible with literally any game on Google Play.

But the experience of configuring the controller in a non-compatible game is not so good.

It takes a little patience to configure the controls for each game that is not supported.

“But is it good to play Free Fire or PUBG? ”

For Battle Royale games, this type of controller is only recommended if you have a hard time getting used to a 3- or 4-finger HUD. Who already has some experience with these HUDs, this control will not help at all. But if you're new to playing on touch screens, it can help you a lot.

Does the cooler make a difference?

GameSir X3 comes equipped with a thermoelectrically cooled cooler, which makes it work as a “mini air conditioner”.

It's not just a fan. The cooler uses the physical Peltier principle, which produces a temperature gradient at the junction of two conductors. The result is heat production on one side and cooling on the other.

The X3's cooler isn't as aggressive as other brands on the market, and that actually has a positive side.

It does not form ice, as excessive cooling can be harmful to the smartphone.

On the contact part of the GameSir X3 cooler, the temperature can drop to as low as 10 degrees Celsius. What a good number.

I know a lot of people will complain that the cooler isn't positioned where the CPU is, but in reality, no cooler is.

In this case we are only offering a “relief” for the smartphone, so that it does not get completely heated, including the battery, which is one of the most sensitive parts to heat.

When the smartphone gets too hot, it starts to drain the battery faster and cause more severe thermal throttling.

Coolers of this type are never in direct contact with the processor.

You can even put it in the exact part where the processor is, and even then, you won't be in direct contact. It would be like putting a cooler like that on the bottom of a gaming notebook. Help? It helps, but it is far from having the efficiency of a PC cooler.

Only if the smartphone is made for this purpose like: Redmagic, Legion Y90 and ROG Phone, do we have perfect cooling. The coolers of these devices have direct contact with the processor.

But by lowering the overall temperature of the back, you avoid a general overheating of the smartphone. Which is great for tasks like running heavy games or emulation.

There is no button to turn on the cooler. Just connect a power source (powerbank or charger) and it is activated.

But in the end, does it make a difference?

Does! But it really depends on what you're going to do.

For example, if properly configured, some heavy games may not demand a lot from the smartphone and it won't even heat up very much.

I consider this cooler solution recommended only for those who want to play at full throttle and emulate consoles like PS2 or Switch.

“Oops there? Emulate the Nintendo Switch?”

“How do you emulate Nintendo Switch on Android? Nobody told me about it.”

If you haven't seen Adrenaline, Olhar Digital and other big sites talking about it, it's because they're afraid of having a problem with commenting on the subject.

It's true, GameSir X3 has a kind of "secret" feature, which only emulation aficionados talk about.

The controller has native (and free) support for the Nintendo Switch emulator for Android EGG NS.

According to sources, it uses code “stolen” from the Yuzu PC emulator.

To make anyone even more suspicious, this emulator requires a monthly fee and an internet connection.

But if you have a GameSir controller like the X2 or X3, you can play for free.

And the stop gets even better with the possibility of changing the front buttons, putting the XYBA in the Switch standard.

As much as we are navigating “murky waters” here, the truth is that Switch emulation is kind of a “sale point” for this controller.

As the emulation of this system or PS2 demands a lot from smartphones, the compatibility of this emulator, combined with the cooler, make this controller perfect for those who like emulation.

Buttons and analogue sticks after 2 months

When it arrived, the GameSir X3 came with the R2 button stuck and stuck. However, it seems to be a problem with my unit and it was enough to put something pointy there that the button “unlocked” and went back to working normally.

After two months of use, the analogs and buttons continue to work perfectly. All with accurate responses and zero delay.

However, the analog sticks are not as accurate as those on the Xbox controller. The triggers are digital only, unlike the Xbox ones, for example, which respond to pressure.

So for those looking for precision in competitive games, it may be that in some moments the aim with them leaves you in your hand. But it is worth remembering that many games have gyroscope aiming, which makes the aim much more accurate, and does not require adjustments by swiping or using the analog stick.

The GameSir X3 buttons give the feeling of a quality product.

The only catch is for the triggers that are digital. Those who enjoy racing games, for example, if you play a game where the triggers feel the pressure imposed by the finger, you will be disappointed. There is no support whatsoever in this case, the trigger will recognize the intensity with which you tap the accelerator, either it is 100% or it is 0%.

GameSir X3 is worth it if you want to take advantage of all the features of the controller, such as the cooler and support for the EGG NS emulator.

The control is expensive, but for those who are going to focus on emulation it is almost perfect.

But, for those who just want to run some heavy games on low graphics settings or play some console emulators that don't demand much from your device, we recommend getting the Game Sir X2, which is much cheaper and has support for the EGG NS, however, it will not have interchangeable buttons or the cooler.

[Warning: All links contain reference code. When purchasing through them, Mobile Gamer Spain receives a commission from the partner stores.]

The unit of this review was kindly provided by GameSir, but the manufacturer had no participation in the preparation of this review. There was no request to see the review beforehand and we were free to criticize the product.

add a comment of Review: GameSir X3 is expensive, but “secret function” justifies the price!