hype? We have! PUBG: New State has already passed the mark of 40 million pre-registrations. the game for Android e iOS arrives later this year and the producer says it will reveal the release date soon. 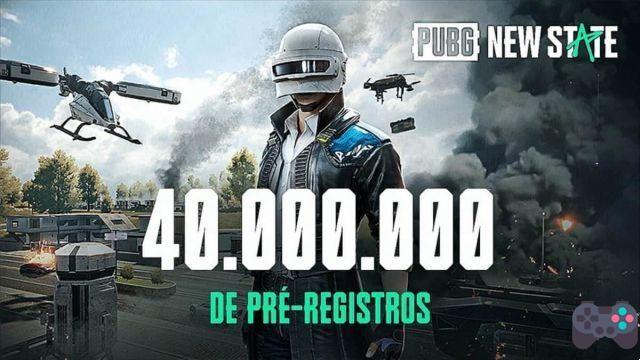 PUBG: NEW STATE Executive Producer Minkyu Park commented on the brand, “We were able to achieve this level of success because of the enthusiasm of fans around the world and their belief in the work of PUBG Studios.” “We are now focused on evaluating the feedback received during the second alpha test of PUBG: NEW STATE and further polishing the game ahead of its official release this year. We dedicate all of our resources to ensuring that PUBG: NEW STATE lives up to fan expectations, both in entertainment and stability.”

Recreated from the ground up by PUBG Studio, the pioneer in the Battle Royale genre, PUBG: New State shows that the BR formula is looking tiresome to the public. The new game will be released for free on Android and iOS in 2021, and according to its page on the App Store, it will arrive on October 8, 2021.

According to Krafton, this will be the mobile game that will feature more dynamic and realistic firearms. The rendering technology will be state-of-the-art to match the latest devices and push the limits of current games.

What is PUBG New State?

In case you don't know what game this is, PUBG New State is a new version of the famous Battle Royale, created from scratch by Krafton and his own studio, PUBG Studio.

The game is being produced completely independently and without a partnership with Tencent (Proxima Beta).

New State takes a different approach, with a more technological and less apocalyptic future than the original PUBG Mobile. However, the new version intends to be more “down to earth” and less surreal than the latest PUBG Mobile updates. But it still remains a Battle Royale with multiplayer clashes for up to 100 players.


What are the Requirements to Play PUBG New State

PUBG New State may not look like it, but it will require more resources than its “big brother”, PUBG Mobile. Don't be fooled by the "low" RAM requirements, they are actually referring to the device's "free" memory. In other words, on Android, for example, you will need at least a smartphone with 4 GB of RAM.

Punishing: Gray Raven finally arrives for Android and iOS in the west ❯