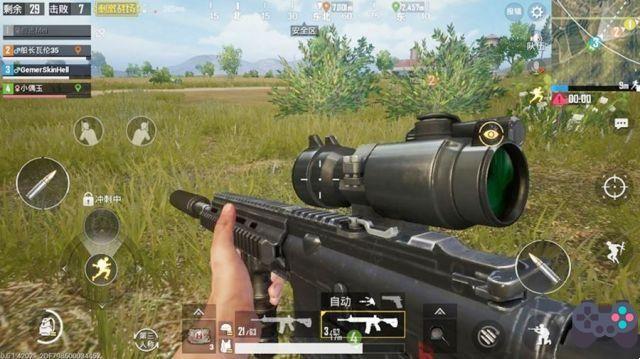 Among the novelties of version 0.6.1 of PUBG Mobile “Battlefield”, the Chinese version of the game released for Android and iOS, is the long-awaited first-person mode, now released for all players. Check out this and more news of the new version.

PUBG Mobile “Battlefield” has finally been updated to version 0.6.1. To update, just open the game and an update of about 400 MB appears.

But if it doesn't update, you can redownload the APK directly from the official website (pg.qq.com). To download again just tap the central yellow button.

The new first-person mode will be clearly visible just below the button to start a match. Tap on it, and access the second option to go to a mode where all players are only with first person mode enabled.

You can also try first-person mode at any time in normal matches. To do this, access the game menu and tap on the option shown in the image below.

After doing this, a button will appear at the bottom of the screen. Just tap on it to enter and exit the first person view.

Other new features of PUBG Mobile version 0.6.1 are the glass that now appears in some windows. Another sound feature for players to keep an eye out for enemies.

Bots have made a small comeback in first-person mode. They seem to have resurfaced in droves until players are used to the new camera style.

PUBG Mobile now has a special menu with a detailed description of all weapons. This new menu will help players choose the best weapon, in addition to making clear, in game, the damage capacity of each one.

All players, in all modes, can now carry three firearms (two rifles and a pistol).

Also see how to download and play the Chinese versions:

PUBG Mobile will be (re)launched in India under another name ❯

add a comment of PUBG Mobile: learn all about version 0.6.1 (LightSpeed)