The PocoX3 Event Copa America PocoX3 will take place this Saturday (21), starting at 6 pm. Held in association with Twitch y Xiaomi, the cup will be exclusively online and will celebrate the launch of PocoX3 NFC.

The PocoX3 NFC is an "intermediate premium" version of the Pocophone. Although it does not come with a top-of-the-line processor, the Snapdragon 732G performs very well in games and is capable of easily running PUBG Mobile at 60 FPS. However, if it is adopted as the official device of the event, it will be interesting to see the reaction of the competitors, because the western version of the game does not yet support 120 FPS (only the Chinese version is supported). 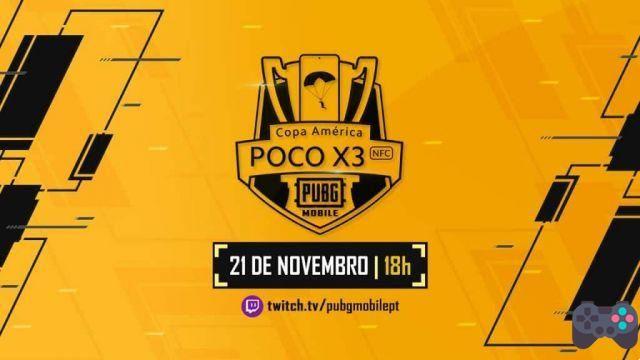 There will be a total of 25 teams of 4 players that will be composed as follows: 1 influencer, 1 professional player, 1 friends and 1 player from the audience from all over Latin America. There will be five rounds, each with unique rules.

The Copa America PocoX3 will be broadcast on the official PUBG MOBILE eSports channel on Twitch, with Bida as narrator and commentary from the Vespa launcher. In addition to them, the influencers Zigueira, Rato Borrachudo, Blxckoutz and Frazudo will broadcast their participation directly from their channels.

Viewers can participate by joining the team of one of the influencers. In the official page of Poco it will be possible to interact through comments on promotional posts to have the opportunity to participate in the competition.

The championship rounds will take place on the Sanhok, Erangel, Miramar, and Livik maps, each with their own challenge and rules that will earn them points in the race for victory.

LINK TO BROADCAST THE EVENT ON TWITCH