Preview: Was Lineage 2 Revolution worth the wait? 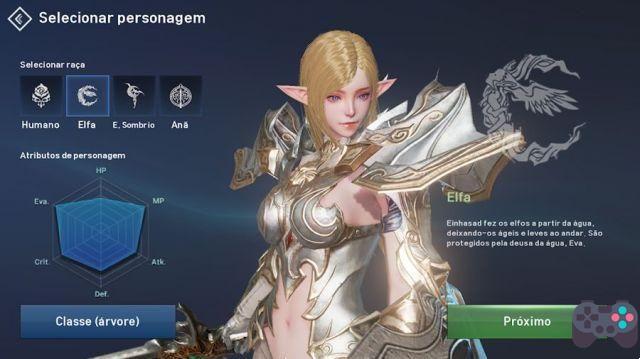 Lineage 2 Revolution will finally be released in Spain on the 9th of May to Android e iOS. The BR server was announced at a special event in São Paulo, which was even attended by the CEO of Netmarble. But was the wait worth it? Check out our preview of this long-awaited MMORPG.

Netmarble has big plans for Lineage 2 Revolution Spain. Depending on its success, several other games from this South Korean producer can be localized into our language.

The BR server presentation and announcement show the producer's commitment to establishing a firm flag in our territory, which is home to one of the largest communities of mobile players on the planet.

Serving as a prologue to the events on the PC, the mobile version puts the player at the center of the confrontation between the two elven races and an evil sorcerer.

The “Lore” of the game is very well presented in breathtaking cinematics. All in Spanish, with perfect timing and fit, alternating between gameplay and non-interactive scenes. Lineage 2 Revolution, despite its focus on multiplayer, takes its story very seriously.

– Stunning graphics even on old phones

I played Lineage 2 Revolution on a Lenovo Zuk Z2, a device with similar power to a Galaxy S7. However, the game does very well with older devices.

I say that, because I also tested the game on a very tired Samsung Galaxy S4. To my surprise, the game featured beautiful graphics on this 2013 device with only 2GB of RAM. Yes, even on the old 32-bit processor, Lineage 2 Revolution still presented a very nice look with various lighting effects on.

Lineage 2 Revolution brings back classic characters like Elves and Dark Elves, Humans and Dwarves. The look can be changed (but not much).

It might seem like each character is closely tied to a class, but that's not quite the case. There are three main classes (Warrior, Rogue and Mystic) that can be subdivided into two more classes.

– Is it true that Lineage 2 Revolution “plays itself”?

One of the most controversial points of Lineage 2 Revolution is its mechanics of automatic missions. Through it, the game practically “plays itself”.

Yes, that's a fact. Auto mode is strong in this game and can dominate the single player experience if the player decides to just play to level alone.

But in boss battles, which need extra help from other players, you can't count on the automatic mode. And in PvP it doesn't help much either.

A lot of people criticized, and criticizes the game, having played only a few minutes. The players are right. For those just starting out in the game, the automatic mode takes some of the shine out of things, which only get interesting again a few days later.


– Multiplayer for all tastes

Without a doubt, the star of the game is the Castle Siege mode (Castle Control). The player needs to join a guild of up to 50 members, and face epic wars of up to 200 players at the same time (4 clans facing each other at the same time).

As if that wasn't enough, there are colossal bosses that require the interaction of up to 100 players in order to defeat him. As stated above, the best part of the game is in the multiplayer modes and interacting with other players.

– Killing the nostalgia of Lan-houses

Those who are older and spent afternoons and afternoons playing Lineage in Lan-houses listening to power metal will really enjoy Lineage 2 Revolution. The return of classic characters, that sense of adventure, a giant world to discover, the new mobile game brings it all.

To answer the title question, Lineage 2 Revolution was worth the wait. Don't worry too much about automatic systems, they can all be disabled easily. The important thing is to have fun in a free game that will surely make many fans of the old days get excited.

add a comment of Preview: Was Lineage 2 Revolution worth the wait?