The successful channel on Youtube, Back door, has already launched fun types of products, books, t-shirts, apps and etc. The novelty is the game for Android of the humor group that boils down to the episode “Quem Manda”, but known as “The Blue Ball Gorilla".

In the game, we control the young Marcelo, who wants to go out with the house owner's daughter. However, the “Gorilão da Bola Azul” will show who is in charge. The gameplay is a mix of Mario and platform games. However, the gameplay is simplified and the player only controls the character's jumps and dodges. 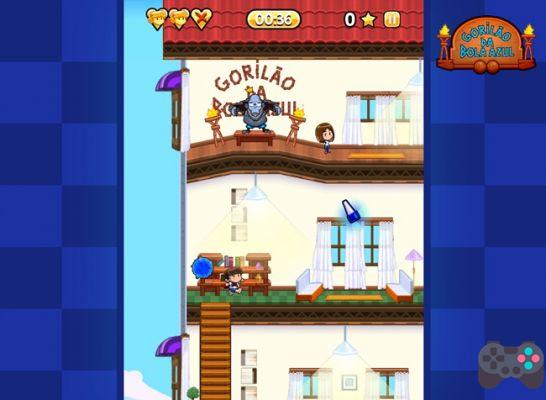 Bola Azul has a casual profile, where the player will have to concentrate to get the three stars. The objective is to reach the end of each level without suffering damage caused by drops of enamel paint thrown by the gorilla in the best “JumpMan” style. The gameplay is simple, but don't think the game is easy. There are only three stages and player can collect items to earn real discounts on the back door t-shirts. The most fun are the phrases in the video that appear at unusual moments. Blue Ball is available for Android and requires 2.0 or higher. The game features advertising, but only when the device is connected to the internet.

Ps. If you don't know the Blue Ball Gorilão. see the video below: