When POCO F1 came out in 2018, it was quite a stir. The smartphone had a top-of-the-line configuration and a very affordable price.

In 2021 things are slightly different. The arrival of the third generation, the POCO F3, did not bring a more powerful processor on the market.

But is it really that important? This is what we will see in this analysis. 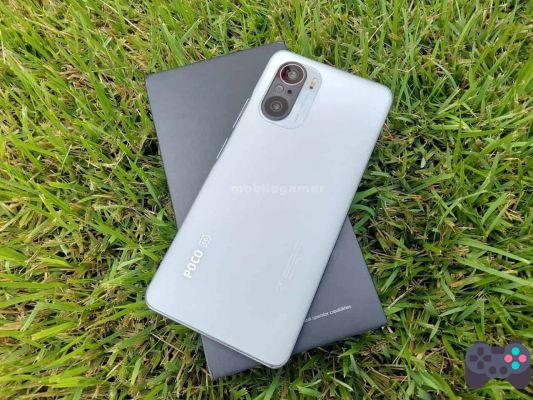 What is the POCO line?

POCO is a subsidiary company of Xiaomi. It was created to be an “alter-ego” or competitor of the Redmi line, which was already getting quite numerous and complex.

To simplify things for the public, the POCO line arrived with a very simple proposal: “more for less”.

It all started with the Pocophone F1, the device caused a stir in the market and brought almost everything from a top of the line, with a very affordable price.

POCO X3 and X3 Pro are the most cost-effective smartphones. While the F3 was to be the “top of the line” of the brand, that one appears with “something” more.

But this top of the line comes with quotes. The processor revealed at the F3 presentation event is the Snapdragon 870.

That processor is a Snapdragon 865 Plus with an overclock and 5G support.

So it's not the 888, which is the most powerful processor today in Android devices.

We purchased a POCO F3 for review and now you can check out our full review.

The POCO F3 comes in a box very similar to the POCO F1.

In addition to the traditional transparent case that is included in the package, this time, the device already came with a film applied.

It also comes with some stickers that are really cool if you're a POCO fan. Other items that come with the smartphone are: 33 volt charger, USB-C adapter for headphone jack and pin to open the sim-card drawer.

Despite not bringing the 888 snap, the F3 does not disappoint in other settings that impact games.

It has LDDR5 memories, the fastest today and an internal storage system USF 3.1.

With so much firepower it wouldn't make sense to have a simple IPS display.

Fortunately, the F3 has a respectable 6.67-inch AMOLED display with 120 hertz refresh rate.

A very large screen, which is annoying in everyday use, but in games it is excellent! 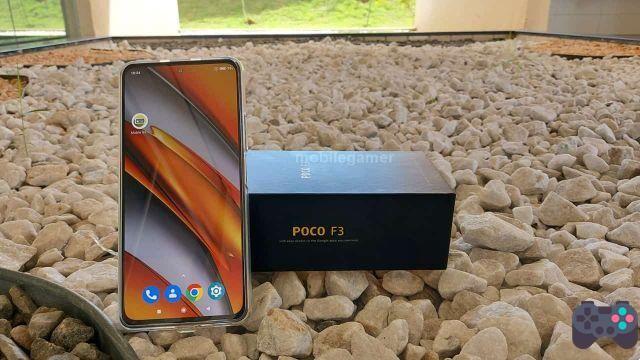 The POCO F3's construction is as expected of a premium mid-ranger: respectable specs, but with a plastic ending.

Because it has a glass back, you should already know that the device transfers a lot of the heat it generates to your hand, so most of the complaints about the device “getting too hot” come from there.

Well-made finishes and a sober design, without frills. It has no screen with infinity edges and no sensor on the screen. Everything about the F3's design is simple.

In terms of protection, the smartphone was only IP53, which is protection against dust and splashes. A pity, because the F3 sacrificed the headphone jack and even comes with a case with protection for the USB-C input.

All this gives the impression that the device would have more protection against accidents with water, but as always, be extra careful with this one. But if it's any consolation, user testing has revealed that it survives some accidental dips well.

Here are the results of some synthetic tests.

It is worth remembering that this type of test does not correspond to a real scenario of use, but it serves to metrify the smartphone, and to know in which position in the table it is positioned in relation to other Android phones.


The first test is not really a test, but it does show that the Snapdragon 870 is indeed an overclocked Snapdragon 865 plus.

With a higher clock, it makes sense for the Snapdragon 870 to be hotter during games. This is normal and no need to worry as the chipset has liquid cooling. That is, this allows the chip to operate at higher temperatures.

On Geekbench, the F3 scored 987 points on single-core and 3.249 on multi-core, very close to the score of the Snapdragon 865 plus.

In the tests that we saw on the net, other POCO F3 even scored higher, but this depends on several factors. However, the test device is not far from this result.

An interesting benchmark for us is the 3Dmark Wild Life (Stress test) which measures smartphone performance in 3D rendering over 20 minutes.

The performance drop after the first few minutes is normal, and that of the POCO F3 is within the expected 10% loss of performance.

This even sounds like “looking for egg hair”. In a real scenario, playing, you will hardly notice this drop.

All games run incredibly well on POCO F3. All but… Genshin Impact

In Genshin Impact we can notice that the performance of the device drops a little.

But Genshin Impact is a game that is CPU Bound (it demands a lot from the CPU and not just from the GPU).

The game is clearly poorly optimized on cell phones and even smartphone gamers are struggling to maintain 50fps throughout the game.

Other tests to complement our review are the “read and write”, which shows that POCO F3 uses even the fastest IO system today, and the GPS test. Again, unsurprisingly, the smartphone locates itself very quickly.

Watch our review to see the test in games:

We got to the part that matters most to us, right? The games!

POCO F3 simply flies in Android games. Any game runs smoothly. Games like Fortnite, PUBG Mobile, Call of Duty, and other heavier games today run without problems on this smartphone.

As you can see, we enabled the device's real frame counter and a chipset temperature monitor.

Chipset temperature, not battery! A lot of people get confused and keep measuring battery and screen refresh rate.

There's only one game that POCO F3 suffers from, as well as all Android smartphones these days (and iPhone 12 Pro Max too) and that's Genshin Impact.

When it was released, the game was locked at 30fps and later the company thought it was a good idea to release 60fps.

Why my god! Now users are desperate trying to make their phones run the game at maximum video setting (the famous ultra) at 60fps.

The result? It was even possible a few months ago, but the latest updates left the game very poorly optimized.

As you can see, the POCO F3 struggles a lot to keep the frame rate above 50fps. The chipset temperature reaches 65ºC.

Our recommendation is not to suffer for nothing! Save your device and battery so you don't cry later. Set it to 30FPS and be happy.

This trouble is only with Genshin Impact.

In several other Android games, POCO F3 gives a show, runs everything up to 60 fps, when the game allows.

Maybe with some updates, the game will run at 60 FPS as smooth as smartphone gamers.

See some games that run at 120 frames per second on POCO F3.

The full list of games that have 120fps enabled on Android can be found here.

Cameras and Examples of 4K Videos

If there's one aspect where the POCO F3 drops the shuttle, it's in the set of cameras.

They're not bad, but they also don't give that "top of the line" feeling.

The front mainly. It looks like the same camera as the POCO F1, devices from 3 years ago.

These are good sensors, but we feel the stabilization is digital rather than optical.

Some Spanish websites say that the smartphone has optical stabilization. But do not have. It loses badly to the S10 Lite, in this regard, for example.

In the audio, POCO did a good job putting two speakers. With this, the device enables the stereo mode for the reproduction of any audio, whether game, music, video.

The smartphone also has 3 microphones that are great for capturing 360 audio or activating the noise reduction function during recordings and calls.

A nice bonus is that the phone comes with an infrared sensor, something that usually comes only in Xiaomi Redmi and Mi line devices.

Through the cell phone you can control several devices in the house, dispensing remote controls.

The POCO F3 is that intermediate with an extra taste for speed.

The device maintains the tradition of robust specifications, but this time it left out the most powerful processor of the year and decided to use a revamp from last year.

The F3 also ditched the 3.5mm plug and we missed a protection against water dips (accidental or otherwise). The smartphone even comes with a cap for the power connector. All implying that such protection exists, but does not exist.

It became bad? No, but if you want to have a real top of the line at a competitive price, we suggest waiting for a possible “POCO F3 Pro”, from here to the end of the year.

As usual, Xiaomi mobile costs a kidney in Spain. So the best thing to do is to buy imported and already set aside some money for potential surprises with the recipe.

In our case, the publisher paid R$390 in tax+fees.

Finally, we do recommend the POCO F3, but with reservations.

Buy it if you have a very outdated device and want to make a “leap” into the “new generation” of Android games.

But it's not worth investing so much in the POCO F3 if you already have a smartphone with Snapdragon 855 or 865.

For example, in Spain it is possible to find the Samsung Galaxy S20 FE with a price very similar to the POCO F3. If you don't have the patience to import, this is a good option.

And that was our review of POCO F3, soon we will post many more reviews here on the site. What would you like to see? Do not forget to comment, a big hug and until next time.