The book “Animal Farm” by George Orwell (Animal Farm, in Spain) is perhaps the literary work that best describes how society really “works”. In 2020, a game was released with the same name as the book and narrates the fable of animals in the form of an adventure. The result is a necessary reinterpretation and many similarities to current times.

In this satire on a socialist utopian society, animals revolt against their owners, however, instead of uniting, some want to be more privileged than others. The result is a totalitarian regime ruled by a pig.

At Orwell's Animal Farm, the animals fought their human master explorers. Now they are in charge. Assign your tasks, manage your resources, choose your laws and direct your propaganda. Determine which animals will sacrifice and which will be "more equal than others."

George Orwell's 1945 novel was a scathing critique of totalitarianism in the early days of the Soviet Union. Since then, he has spoken to people of many ideologies in countries around the world. It offers a powerful awareness of how power can be abused – and of how generation after generation seeks a more just and egalitarian society, where the many do not suffer at the hands of the few.

Orwell's Animal Farm brings familiar characters and situations into the middle of a game and into the context of 2020. Depending on how you play, you may find situations very close to those in the book, or others influenced by events Orwell has never seen.

Play to explore a classic tale from within. Play to try to run the farm – or because you dream of spreading Animalism around the world. Play because you've always wanted to oversee a project to build a herd of cows. Play because the Boxer deserved better. 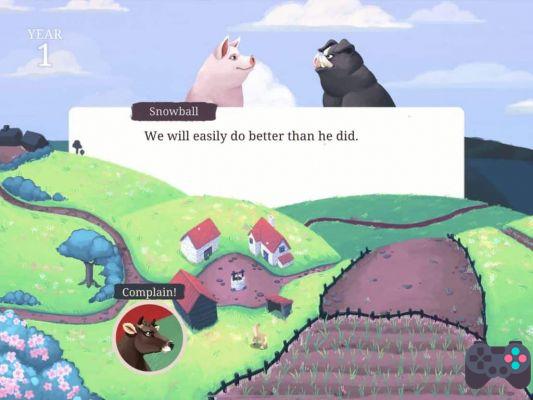 The game is available on Google Play and App Store with prices ranging from R$27,99 and R$22,90 respectively. There is also a PC version that costs just R$18.

The first time I heard about Animal Farm was thanks to the fan-made clip of the song “Pigs (Three Different Ones)” by progressive rock band Pink Floyd. You can see that clip here.

The 10 Most Beautiful Games for Android, iPhone and iPad ❯