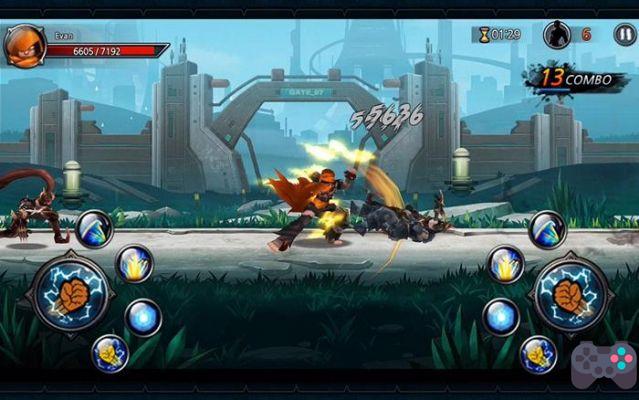 One Finger Death Punch 3D is the new version of fighting game not quite popular Android. In a short time since it was released, the game has already reached the mark of 500 thousand downloads. The 3D version adds a special, a kind of FATALITY which uses on-screen commands to deliver a devastating blow.

As the name says, the attraction of the new version of One Finger Death Punch is 3D. The game has very beautiful three-dimensional graphics, and also very light.

The new technology brought the possibility of adding a wide variety of characters. You can choose between a man and a woman and equip them with all sorts of weapons and clothes.

The commands of One Finger Death Punch 3D are simple. At the beginning, there are two big buttons on the screen, when tapping on each of them, the character punches in the direction the button is. Enemies appear on each side of the screen. You have to be quick to finish them all.

– How to move from the L and R screen

Many players were left with doubts in the new One Finger Death Punch 3D. The reason for this is the screen to release the special move. During the button sequence, you need to tap the screen at the moment when the L and R buttons pass the mark at the bottom of the screen.

Touch the button on the left side of the screen “L” and on the right side “R”, only when the buttons pass through the line. Tap slowly to complete the streak and finish off your opponent.

One Finger Death Punch 3D is an addictive game. Whether for distraction or to know what happens next, the game draws a lot of players' attention thanks to its action and not requiring an online connection. There is an arena mode where you face other players, but to play it, you need internet.