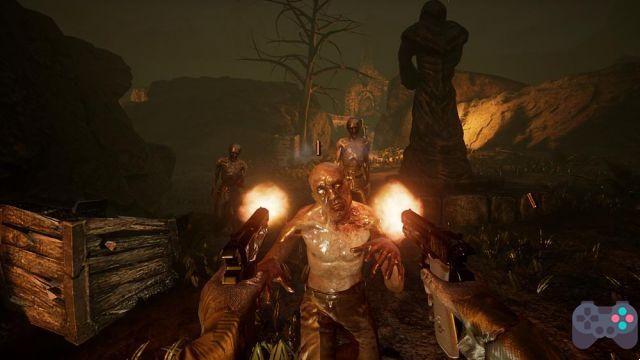 Project R.I.P Mobile has just been released on Android and iOS. The shooting game is a Survival Horror in which enemies appear in "hordes". The game is impressive for its visuals and for being offline (at least for a while).

Project Rest in Pieces (RIP) arrived alongside the release of “Doom Eternal” on console. Is it coincidence? The game has the same purpose of offering a hellish shootout. However, RIP is much more modest than the new Bethesda hit.

As stated above, enemies appear in hordes and your mission is to eliminate them. Although there is a good variety of enemies, and the graphics are very beautiful, the game does not offer gameplay that has evolved over time, being below other games of the genre.

It's no use comparing with games like Dead Effect, Dread Trigger or Unkilled. In all of these, the player goes through several scenarios, many stages, faces enemies that shoot at you, even faces bosses.

Project RIP Mobile is very modest but it's a start for the developer Storming Tech in the shooter business. The developer is known for the game Escape Legacy 3D.

Life as we know it does not exist, hordes of undead and demons have arisen and now rule the land. The human race was forced to live in underground shelters to survive. To take what used to be theirs, humanity has gathered forces and established small specialized teams to eliminate the threat. This action was called Project Remaining in Pieces, also known as RIP

'Only a Show' Android game is free on Amazon ❯